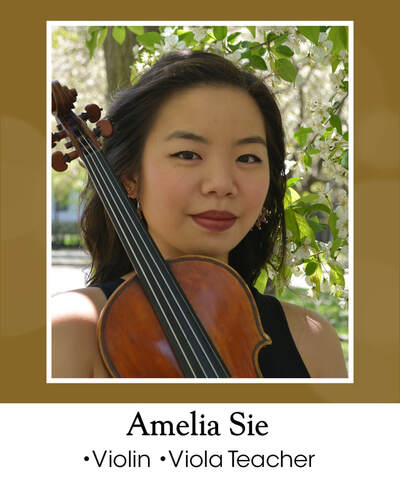 Teaching Philosophy: “My goal as a musician and educator is to always strive to have a deeper understanding of the connection between our bodies, our instrument, and the music we create. These three things are closely intertwined and only through ease of playing can we be completely free to create an experience greater than ourselves!"

Hailing from Bellevue, WA, violinist Amelia Sie is well-known to concert audiences in both the Pacific Northwest and Boston areas. She made her solo debut with the Seattle Festival Orchestra at the young age of 8, and has gone on to solo with the Seattle Symphony, Coeur d’Alene Symphony, Bellevue Philharmonic, Cascade Symphony, Sammamish Symphony, and Philharmonia Northwest. She is the 2012 winner of Seattle Young Artist’s Music Festival Concerto Competition and has been featured on National Public Radio’s ‘From the Top’ program. She was recently a semi-finalist in the 2016 Hudson Valley Philharmonic String Competition.

Amelia is also a passionate chamber and orchestral musician. She has worked with Joseph Silverstein and members of the Ébène Quartet, Borromeo Quartet, and St. Lawrence String Quartet, amongst others. She has also worked with many premier conductors, including Christoph Eschenbach and Hugh Wolff, and most recently was concertmaster under the baton of Ton Koopman at the 2017 Schleswig-Holstein Music Festival. She has performed in many renowned concert halls, including the Elbphilharmonie, Konzerthaus Berlin, Jordan Hall, Benaroya Hall, Symphony Hall, and Carnegie Hall. Amelia was recently a member of New England Conservatory’s Chamber Orchestra, directed by Orpheus Chamber Orchestra bassist Don Palma. She currently is a member of the Harvard Baroque Chamber Orchestra, a historically informed performance group led by Phoebe Carrai and Sarah Darling.

An avid performer of new music, Amelia has performed thrice for the Boston Symphony Orchestra's "What I Hear," a concert series showcasing works of living composers commissioned by the BSO. She has also played with new music group Callithumpian Consort. She was a part of the Spoleto Festival USA's 2016 U.S. Premiere of Helmut Lachenmann's opera The Little Match Girl. In August 2018, she performed Lei Liang's Verge Quartet for the composer at the Kneisel Hall Chamber Music Festival.

Amelia, 23, recently completed her Master's degree at the New England Conservatory under the tutelage of Soovin Kim and Miriam Fried. She received her Bachelor's degree there as well, studying with Paul Biss. She has previously studied with Jan Mark Sloman, Simon James and Margaret Pressley.