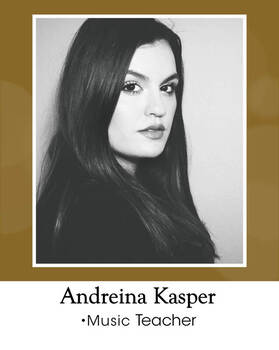 Teaching Philosophy: "Anyone can sing! I believe that every student has the capacity  to shape  their talent successfully with the right guidance and by developing healthy singing habits. Why do I love and enjoy teaching so much?  In my years of teaching, I have been able to witness the endless possibilities  students can achieve without them knowing it! "We all have times when we might not feel secure or capable of managing through a performance on a stage, but my goal is to impart  the trust that my students need to believe in themselves and break the fear of performing. Learning how to sing can teach us many useful resources that can also assist us in  other situations of our lives.

"These principles also apply to playing the piano, ukulele or the cello. I teach all these instruments by using the human voice as a reference. The best players are those who become beautiful storytellers and who learn how to sing through their instrument. Developing healthy habits is a vital part to playing balanced, relaxed and with ease.
"I encourage my students by teaching them technique in a way where it always relates to servicing the purpose of the music. I believe in building upon the weaknesses that cannot be hidden in order to help my students express themselves authentically.

"My overall goal is to  instill a lifelong love for music in every student and to inspire them to become the best musicians  and artists they can be."

Latin-American vocalist, cellist, pianist, and pedagogue Andreina "Nina" Kasper  began her music education under her mother, Maria Antonieta Salas, at the age of twelve. She attended New World School of the Arts where she studied cello under Aaron Merrit. Miss Kasper also took chamber music classes and orchestral studies at Florida International University where she studied cello with Javier Arias and played under Carlos Riazuelo. She has attended the prestigious International Music Festival in Philadelphia (2010) where she studied under Kimberly Fischer and Udi Bar David and played principal cello in the festival orchestra. In 2013, she began studying privately with David Cole (Lynn University) and in 2015, with Jason Calloway (FIU). She was a guest cellist in 2009 at the High School for the Performing and Visual Arts in Houston, TX and received coachings from Ivo Jan van der Werff at Rice University. While in Houston, she was also invited to play cello and perform the National Anthem at the Venezuelan Embassy. In 2016, she participated in a series of master classes dictated at Florida International University where she worked with renowned violinist Laura Bossert.

As a vocalist, Miss Kasper has portrayed the lead roles of Janet in the Rocky Horror Picture Show, the EMCEE in Cabaret and Antonia from Man of La Mancha, the “Bank Manager” in Once the musical, in two regional theaters one in Florida and the other in Connecticut . She has also directed Oliver The Musical, and The Producers in addition to composing original music for new theatrical productions. Andreina has been teaching piano, cello and voice since the age of sixteen. Several of her vocal students have participated in competitions such as The Voice Kids, America’s Got Talent, and the Big Dreams Competition in Miami, FL.
​
As a cellist, Andreina has worked in the Miami Symphony (Miso) under the baton of maestro Eduardo Marturet, Eugene Kohn and Alondra de la Parra. In 2013, she was invited to sing at the Miami Life Awards and consequently sang at the World Out Games where she received a certificate of appreciation from the mayor of Miami because of the artistic influence she’s had in the city. She has worked for Miami Children’s Theater, Ginsberg Productions, Imaginarium, Actor’s Playhouse, Ivoryton Playhouse and Evening Star Productions.

Miss Kasper has studied voice under Angela Gooch, Dr.Karen Hall, Carlo Gazanini and Mary Walkley. Her acting coach has been professor Wayne LeGette. She also studied music theory under Gerardo Aguillon and piano under Odart Graterol and Javier Sardinas. Her Cello teachers have been her mother Maria Salas who formed part of the founding orchestra of “El Sistema, Konstantin Litnevenko, Javier Arias, Jason Calloway, Udi-Bar David, and her current teacher Terry King, She performs on a cello made for her by Carlo Gazanini.

Miss Kasper has been teaching since 2007 and has been with Note-worthy Experiences since February 2020.

Miss Nina has been very good with my son.  Miss Nina has a very beautiful voice and we enjoyed listening to her live voice when she was coming to our home for face to face lessons.  She is very attentive and fun for my son to follow and learn from.  We are very fortunate to have her teach Ethan at his current stage of his musical ability.  Looking forward to keep on collaborating with her to improve my sons' ukulele skills and singing capabilities too.  We would like to recommend Miss Nina to other families who are interested in exposing their children to musing.