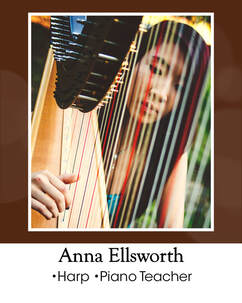 Teaching Philosophy: "I believe learning almost anything is inherently fun; beginning at the first lesson, my top priority is to
identify which aspects of music interest each of my students and use their natural excitement as a motivational tool. Keeping this individualized approach in mind, we set goals together and build a solid technical and theoretical foundation as we work to achieve them. Ultimately, I aim to encourage qualities that are essential to both playing an instrument as well as general life skills, such as curiosity, creativity, determination, and discipline."

Praised for her “clear, sparkling tone” (South Florida Classical Review), award winning harpist Anna Ellsworth is in demand as a performer of both solo and orchestral music. As a winner of the Anne Adams Award, Ellsworth was featured in the opening concert of the 42nd American Harp Society National Conference in Atlanta, Georgia. She has won prizes in the American Harp Society National Competition (Young Professional Division), Korean International Harp Competition, and Young Artist’s Harp Competition and was a two time winner of the Boston Harp Festival’s Stars of Tomorrow competition, subsequently performing in the festival’s Stars of Tomorrow concerts. Additionally, she was a finalist for the Hong Kong International Harp Competition and a nominee for the Harvard Musical Association’s Arthur W. Foote Prize. Ellsworth has made solo appearances alongside the Hemenway Strings, Miami Music Festival Orchestra, and Boston Conservatory Conductor’s Orchestra and has performed in such venues as Carnegie Hall, Elbphilharmonie, and the New World Center. In addition to holding associate harp positions with the Columbus Symphony Orchestra and Boston Lyric Opera, she also frequently performs with the Portland Symphony Orchestra. Summer festival credits include the Texas Music Festival, Orchestra of the Americas, Miami Music Festival, Brevard Music Center, and Caroga Lake Music Festival.

Ellsworth holds degrees from Yale University and Boston Conservatory at Berklee.​ She has been teaching since 2017 and has been with Note-worthy Experiences since July 2019.

We could not be more pleased with Anna and your organization- we have done lessons with two other instructors (who were quite experienced) and Anna is the best!  She’s really dedicated and obviously talented in instruction as well as music. What a find!! Thank you!

Anna is terrific and she is a saint with my son who is on the spectrum.  He had a couple tough days recently and she is patient and knows how much to give him in terms of new education vs allowing time for him to enjoy playing piano in his own way.  We are so lucky to have her!