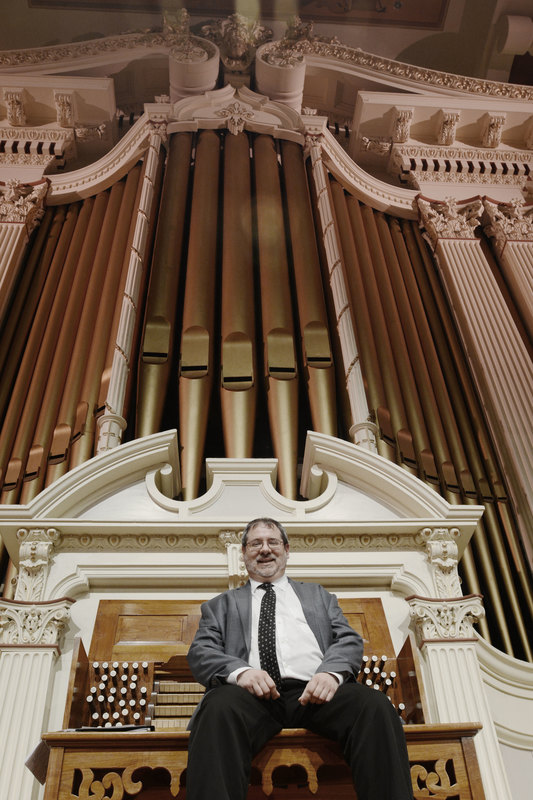 1. What is the first instrument you learned to play?

I started piano lessons at age 7, with a local teacher. I lived in a very blue-collar town, in a very blue-collar family. The stroke of luck is that my piano teacher happened to have studied voice at New England Conservatory.  When she recommended to my parents that they send me to the conservatory, I don't think they knew what a conservatory was.  It was one of the biggest strokes of luck in my entire life.  At age 8 I was enrolled in the NEC Preparatory School, and by age 13 I had already completed the "certificate program," encompassing the gamut of theory, harmony, counterpoint, etc.

They are nothing alike at all. Other than the fact that you have black and white keys, the two instruments have nothing in common.  In fact, pipe organs themselves have little in common with each other.  Every instrument is tailor-made to its location.  Even individual organ builders build instruments that are nothing like their siblings.  That is the greatest thrill to me: to go on tour to Europe and in one town play a large organ from 1990 and in the next town a small organ from 1690.  It requires a flexibility unknown to pianists, who play only a modern Steinway night after night.

3. When did you start composing music and how did you learn to do that?

Well, I am a self-taught composer.  My earliest compositions were for organ, and I can say that it was the organ and its palette of colors that inspired me to compose -- in particular, the 1859 organ at the church where I was playing at the time.

4. What is your favorite genre of music to play? To compose? To listen to?

To play: whatever I'm playing at the time.  To compose: I like writing choral music.  To listen to: I never listen to music. Ever.  If you were a pastry chef, when you got home from work after 10 hours at the bakery, would you start eating cannolis?

5. How often did you practice when you were a boy and how have your practices changed since you became a professional?

6. What was your most memorable musical performance?

It was in July of 2015  at the Basilica in Gubbio, a medieval town near Assisi.  This is an unbelievable story -- and a very Italian story.  The organ in the Basilica was supposed to have been finished at least 6 months earlier.  Well, the delay was in my favor, because my visit coincided with the projected completion of the organ.  So my concert became the official inauguration of the organ.  Now, the Basilica has a wonderful chorus, one of the best in that area.  They wanted the chorus to participate in the concert, to make it more festive.  I asked the director if I could compose a new Mass for choir and organ, dedicated to Don Fausto Panfili, rector of the Basilica.  I never imagined he would take me up on it.  But he said yes!  So I composed the "Missa Pamphyliana", to be premiered by this excellent choir at this dedication of the organ, in the presence of the Bishop of Gubbio.  Now, I arrive in Europe.  I play a concert in Switzerland, then a concert on the Adriatic, then I head over to Gubbio.  And the organ still isn't finished.  They ask me if I wouldn't mind if the concert were moved forward a couple of days!  I said, "But I have another concert to play in Corciano."  "No problem," he said, "I know the people in Corciano.  We'll work on the dates."  Now, because of the schedule change, it meant lodging at the Basilica for 9 days.  I said, "Are you SURE Don Fausto's not going to mind?"  No problem.  So for 9 days I stayed in rather large room, in this wing of about a dozen rooms.  This wing was built around the year 1500.  My room was "XI," in Roman numerals!  My window overlooked the medieval courtyard.  Mind you, this whole complex is way at the top of the mountain, overlooking the rest of Gubbio.  For nine days this is where I stayed, and had all of my meals with the priests and the others -- all the food and drink that you could imagine. It was a blast, except for one slight problem: the organ still wasn't finished.  By the time the organ was functional enough to actually play -- by the time the keyboards were actually hooked up to the pipes -- it was the day before the concert!  Meanwhile, there was another aspect to this whole adventure: money.  I had agreed to a certain fee.  However, they were putting me up for nine days, three meal a day (the term "meal" being an understatement!).  I couldn't take money from them.  Besides, I had another scheme.  I said to the music director, "In lieu of money, maybe you could give me some sort of little honorary title or something? Maybe 'honorary organist' or something like that?"  Well, the concert day comes.  It's the inauguration of the organ, and the premiere of my choral work. The Basilica is packed, with overflow in the courtyard.  And before the music starts, His Excellency Mario Ceccobelli, the Bishop of Gubbio, personally hands me this rolled up certificate with a red ribbon around it, naming me "Maestro di Cappella Onorario della Basilica" -- "Honorary Music Director of the Basilica."

7. You have traveled all over the world performing. Which country or region is your favorite?

Would it surprise you if I said Italy?  However, Austria is a close second.  There are only 8 million inhabitants in the entire country of Austria.  Mountains and trees as far as the eye can see.  I have a deep nostalgia for Austria, because my very first European tour was there, 3 years before my first concert in Italy.  I almost didn't go.  I was worried about the finances.  However, at the Stephansdom in Vienna, an organist suddenly cancelled, and they needed someone during the exact time period that I was going to be there.  I got the concert, which paid enough money that I was able to do the tour.  So here I was, on my very first European tour ever, giving an organ recital at one of the world's greatest cathedrals!

8. What do you like most about teaching young musicians?

Showing a student how to do something that he or she could not previously do!  Even if it's "Hot Cross Buns." It's astonishing to me how "Hot Cross Buns" sounds different with every single student.  No two brains are alike.

9. How old are your boys and do they like to play any instruments?

They are 13, 10, 7 and 5. They seem to enjoy playing music, but I let their mother take care of their musical development.  I never want them to feel like, "Your grandfather was a cheesemaker, and I'm a cheesemaker, and you're going to be a cheesemaker!"  I heard not one note of music in my house, and I became a musician.  They hear me play -- if they want to do likewise, it's up to them.

10. What is your best advice to students who want to learn a new instrument or improve their playing?

The best way to learn anything is to face it.  Each of us has things that came "naturally" to us, without having been taught.  You might call that "talent."  But what happens when you're confronted with something that does not come naturally, and that you can't figure out without being shown by someone else?  That's where the big decision comes in: do you face it, or do you run in the other direction?  I had a lot of "talent" for music at a young age.  By contrast, I didn't learn how to drive until 3 years ago.  And that did NOT come naturally.  But this brings us to the second part of your question.  To improve at something has a lot to do with the time put into it.  I drive about 3,000 miles per month, so I am improving at it.

11. You are rumored to be a wonderful cook.  What is your favorite kind of food and how did you learn to cook?

My grandparents were wonderful cooks, that is not an unusual thing in an Italian home.  However, as I became more interested in my heritage, of which food was only one part, I learned that my ancestors were all illiterate farmers, going back centuries.  It was less about "recipes" and more about their incredible knowledge of farming, irrigation, fertilization, and so forth.  I learned that they would kill a pig once a year, from which they would make the prosciutto and pancetta and guanciale and porchetta and sausages and so forth ad infinitum, and without any chemicals or refrigeration whatsoever, they would feed their families for a year, without anyone ever getting sick.  You could study chemistry at an Ivy League school for 25 years and never learn a fraction of this!  This is why the food of my ancestors tasted so good: because they produced organic ingredients, with their own hands.  My "favorite kind of food"?  Unpoisoned!

12. Any upcoming performances we should know about?

I'm planning some exciting concerts in Wellesley with the MetroWest Choral Artists, an all-professional group of which I'm the founding director.

​Learn more about Leonardo on his Teacher Page.