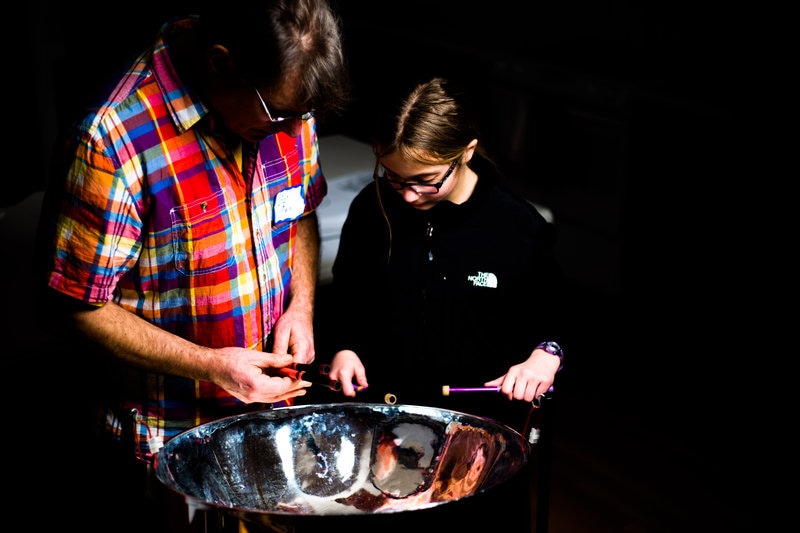 1. Which instruments do you play and do you have a favorite?  I play the trombone, electric bass, steel drum and piano. I do not have a favorite, they are all so different. I love the sound of the trombone and always noticed it is the same range as the male voice. Sometimes I feel like I’m speaking when I play it. I love playing bass and being in the rhythm section backing up great soloists by playing “the right note at the right time with the right feel”. It’s less pressure than being out front playing the melody but equally important and very satisfying.  The steel drum sounds like sunshine to me and I get a lot of pleasure from memorizing melodies and working out sticking patterns. I love the piano because you can “see” the notes and have the ability to play several at the same time creating all the harmonies we learned in music school!

2. How old were you when you first learned to play an instrument?  I was in fourth grade in my hometown of Newark, Delaware. My father played trumpet so of course my mother wanted me to play trumpet so she wouldn’t have to rent an instrument. I had already taken apart and experimented with that old trumpet for many years so of course I wanted something new. Many of my friends were playing trombone and convinced me to join them, I was happy I convinced my mother to rent me one!

3. Who was your first teacher and what was he/she like?  Mr. Woods was the famous (to us) high school band director that later became director of bands at Ohio State University, he came to the elementary schools and taught beginners. I remember him talking a lot about breathing and it confused me, I thought it was all about putting the slide in the correct position. Truthfully I learned how to play by imitating the older boys (6th graders!) that sounded like they knew what they were doing.

4. How often did you practice when you were a kid and how have your practices changed now that you are a professional? I did not practice much at all in elementary and middle school, we had band every day and I was always able to learn my parts and seemed to be highly regarded by the band director, so, why practice? In high school it became much more competitive and most everyone took private lessons. I signed up with the trombone professor at the University of Delaware and quickly realized I didn’t know that much! I had to practice in order to compete in great organizations such as, All State Band and Orchestra and the American Youth Jazz Band as well as trying to be the best player at my large high school.

5. How did you decide to become a professional musician?  After high school I went to North Texas State University and was in deep culture shock personally and musically. I was one of the most ill equipped freshman music majors and met many kids in the same boat as me. We would meet in the practice rooms and talk about what we were going to do. Half of us quit and went back home to be business majors (and get a “real” job!) the other half, the group I was in, still had the passion and decided to work as hard as we could and see how far we could get. That is where I learned how to practice. I did transfer back to my hometown (and friends) at the University of Delaware, but still had the right attitude about working hard at music. After I won an audition to perform in a polka band at Busch Gardens for the summer (and get paid!) I knew I wanted to try my best to be a professional.

6. You’ve appeared on stage, TV and the radio...do you ever get nervous performing? I always get nervous.

7. How do you prepare for a performance? Besides obviously practicing my parts, I listen to the music I am to perform in the car and in the house, I can usually always find a reference recording by professionals. I also imagine performing my parts as if meditating and I make sure I can sing my parts. All this leads to memorization of the parts and that goes a long way to helping with my nerves!

8. What was your most memorable performance?  I had a klezmer concert featuring Itzhak Perlman at the Hollywood Bowl in Los Angles in 2007 or so. Just before the performance the stage manager said, “oh by the way, we always perform the Star Spangled Banner at the beginning of every event, here’s the first trombone part.” It was an orchestra of only about 30 strings and winds plus our 7 piece klezmer band. We didn’t have time to rehearse it but when the concert started we nailed it. We stood when the audience did, in a great band shell, outside in sunshine with members of the LA Philharmonic. It was easy to play strongly and confidently and in tune with such a high level of professionals all around me. It gives me goose bumps to this day!

9. You filmed a popular children’s video, The Fool and the Flying Ship, narrated by Robin Williams. What was it like to make that video? Fun and easy. Finally I got to make the funny plunger mute sounds like you hear in the Charlie Brown specials when his parents or teachers speak!

10. What is your best advice to students who want to learn a new instrument or improve their playing?   Listen to recordings of professionals that perform on your instrument, just like we would have never learned to speak if we had not heard our parents speak. Also, be honest with yourself, you HAVE to enjoy the timbre of the instrument you’re playing. I know students choose instruments for a wide variety of reasons and sometimes this will hinder their joy and progress. Unfortunately there are future musicians who are frustrated and consider quitting just because they’re on the wrong instrument.

11. When you’re not playing, composing, performing or teaching what do you like to do? I play with my kids, work on my house (there’s always yard work, painting or some repair!) I also play disc (frisbee) golf, hike, and enjoy following the Patriots and Red Sox.
​
12. Any upcoming performances or CDs we should know about?  I’m playing a contemporary jazz concert with the Jazz Composers Alliance in Jamaica Plain on April 22, I’m with the Plymouth Philharmonic on April 28, in NYC May 11 with a contemporary klezmer band, at the Burren in Somerville June 8 with a different modern klezmer band as well as many private events, also Fridays all summer at the beautiful Wequassett Resort in Chatham on the cape, we’re “down by the pool” and we play a mix of Brazilian, jazz and pop music.
A proud graduate of the New England Conservatory and the University of Delaware, Mark is an instructor for Note-worthy Experiences Music Studio and founding member of the Boston area ensembles Brass Planet and ¡Klezperanto! Mark performs on trombone, electric bass, keyboard, percussion and steel drum. Mark has toured throughout Europe, Australia, and North America and recorded nine CD’s. He has filmed a children’s video for Rabbit Ears Productions entitled The Fool and the Flying Ship with narration by Robin Williams and been featured in Joel Grey’s Yiddish music revue Borschtcapades ’94. Mark has appeared on stage and in the pit orchestra with the American Repertory Theatre’s production of Shlemiel The First, receiving rave reviews in the New York Times, the Village Voice, the New Yorker and Newsweek. He has performed in the PBS special In the Fiddler’s House and on The Late Show with David Letterman with renowned violinist Itzhak Perlman and was heard on Minnesota Public Radio’s A Prairie Home Companion with Garrison Keillor.   Both an arranger and composer, he specializes in klezmer and jazz music for concert bands and other ensembles. Mark created a publishing company to make this music available for such groups, hamiltunes.org.  ​​Read more about Mark on his Teacher Page.