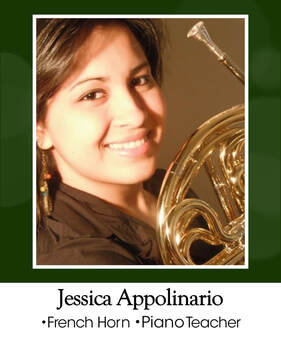 Teaching Philosophy: "Music encourages brain development in children. It helps especially with language, speech perception, memory, hearing, reading and social skills. In my lessons we work on keeping the student interested in learning all the technical aspects of music while loving it and having fun at the same time.I believe everyone is capable of loving and understanding music."

Boston-based musician Jessica Appolinario started to learn piano when she was 4 years old. Music was always a big part of her childhood, so after picking up the french-horn when she was 8, she knew that she wanted to be a musician for the rest of her life.

At the age of 16, Jessica started started volunteering at a music program for underprivileged kids in Brazil where she taught music theory and piano. Her studio included students ages 5-36.

Later on, Jessica was awarded a full scholarship to attend college at the University of North Carolina School of the Arts, where she obtained her Bachelor’s degree in Horn Performance. There she won several competitions and was invited to perform at the Berlin Philharmonic Academy auditions, in Germany.
​
Jessica has also attended important music festivals like the Brevard Music Center, Vianden International Music Festival in Luxembourg, Aspen Music Festival (where she was awarded a fellowship for two years in a row) among others.
Jessica has appeared in some of the world’s most famous music halls like Carnegie Hall, Jordan Hall, Berliner Philharmonie, etc
After graduating college in North Carolina, Jessica moved to Massachusetts, where she obtained her Master’s degree in Horn performance at the New England Conservatory.

Today, in addition to being a soloist and performing with orchestras, Jessica enjoys teaching horn, piano, and also enjoys being a chamber musician. Her hobbies include traveling and running and she dreams of one day being able to run the Boston Marathon!​ She has been teaching for Note-worthy Experiences since October 2019, and is a member of the National Piano Guild.