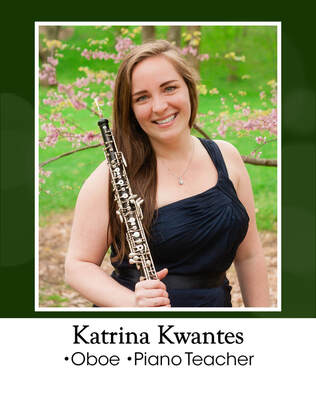 Teaching Philosophy: "Music education can have a profoundly beneficial impact in life. Music is a language. When one is able to understand and communicate in this language, they can develop the ability to express themselves in new, creative, and exciting ways. My desire is to equip my students with tools to understand music through incorporating theory, solfeggio, groupings, hidden slurs, long tones, and much more. From this understanding, they will be able to more fully grow into emotional and personal expressivity."

Katrina has been incredibly fortunate to grow up in a family that values the arts and music. She began playing piano at the age of 7, and oboe when she was 13. After graduating from high school, she moved to Philadelphia to pursue a Bachelor of Music, with a double major in Oboe Performance and Music Theory at Temple University. During her time there, she played in numerous ensembles - both large and small. Katrina moved to Boston in 2016, and has since been awarded both a Master of Music and a Performance Diploma from Boston University. While oboe is her primary instrument, she also enjoys playing pop and classical music on the piano.


Katrina has travelled extensively throughout Europe and North America, playing in numerous summer festivals. She has also played and travelled with the National Youth Orchestra of Canada. This included a summer tour in Portugal, and more recently, a coast to coast celebratory tour across Canada, in honor of her home country's 150th birthday!


While Katrina is Canadian, she was born in the Sultanate of Oman. Throughout her travels there, she has learned that music is truly a unifying language that connects peoples and cultures. This sparked her interest in the relationship between language and expressivity in music. When spoken language falls short, Katrina loves to 'sing through her instrument,' and hopes that she can enable her students to do the same.

​Katrina has been teaching with Note-worthy Experiences since summer 2020.