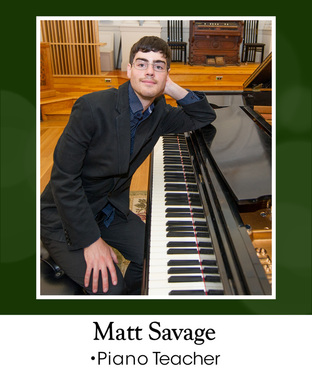 Teaching Philosophy: "​I use a hands on approach that encourages a diverse repertoire and promotes strong rhythmic skills. I like to tap into a student's musical curiosity to create a unique musical sound. "

Matt has had a fifteen-year professional career as a jazz musician, bandleader and composer with ensembles of different size. He has played with some of the biggest names in jazz, including Chick Corea, the Ellington All Stars, Chaka Khan, Wynton Marsalis, Bobby Watson, Clark Terry, Jimmy Heath, Jason Moran, Arturo O’Farrill, John Pizzarelli, Joshua Redman, Terri Lyne Carrington, Jon Faddis, Jerry Bergonzi and Donny McCaslin among others. He’s also opened for rock legends Neil Young and Stephen Stills, and has performed with Steve Earle, Jackson Browne, Shawn Colvin and Al Stewart. Along the way, he’s recorded eleven albums as leader and one as collaborator. He is a Bösendorfer piano artist.

​As a composer, Matt has garnered respect and recognition. He composed and recorded the score for a full-length documentary film, Sound of Redemption: The Frank Morgan Story. The movie, which premiered in 2014, chronicles the life of the late jazz alto saxophonist Frank Morgan. Additionally, Matt wrote almost all the songs on his eleven albums, several of which have been used in short documentaries, on web sites, in school music curricula and in government educational materials. Matt’s latest project is a solo piano album entitled Matt Savage: Piano Voyages, released on October 14, 2016.

​Matt has traveled at an astonishing pace from life on a farm to professional composer and musician. His early years brought a unique set of challenges. At the age of three, Matt could not tolerate music or sounds in general, resulting in a diagnosis of Pervasive Development Disorder, a high-functioning type of Autism. For the next four years his parents immersed him in intensive intervention therapies. At age 6 ½, Matt emerged from therapy and completely involved himself in all things musical. Flourishing at a hyperaccelerated pace, he taught himself to read music and play piano, literally overnight. From his emergence as a child prodigy to his continuance as a mature and respected artist, Matt has been the focus of media attention.
Media appearances have included Marian McPartland’s “Piano Jazz,” NPR’s “All Things Considered,” “Late Night with Conan O’Brien,” “The Late Show with David Letterman,” the “Today” Show, ABC’s “20/20,” the Discovery Channel, BBC, Telemundo TV, and news shows and documentaries worldwide (including the U.S., Germany, France, Japan and the U.K.) The Wall Street Journal, JazzTimes, JAZZIZ, TIME, WIRED, Der Spiegel, The Jerusalem Report, People Magazine, TIME for Kids, American Way, The Globe and Mail, the Toronto Star, The Boston Globe, the New York Daily News, and others have featured Matt in print.

Having received his Bachelor’s Degree from the Berklee College of Music and his Master’s Degree from the Manhattan School of Music, Matt balances his professional music career with teaching. Matt is an Adjunct Instructor at at Bunker Hill Community College and teaches at the Community Music Center of Boston and at Applied Behavioral Learning Services (an organization near Boston for children and adults with autism and other developmental disabilities), since 2016. He is a lecturer in the Fine Arts Department at Saint Anselm College in Manchester, NH and is a member of the National Guild of Piano Teachers. Matt gives masterclasses and workshops domestically and internationally (in English and Spanish) as well as private piano lessons.

​My daughter has been taking piano lessons for 6 years and saxophone lessons for 3 years.  She recently became interested in jazz music.  She started taking jazz lessons with Matt Savage a few months ago.  We have been amazed at his knowledge, preparation, and enthusiasm at every lesson. My daughter especially enjoys learning improv techniques on piano and saxophone from him.  He is truly a phenomenal musician and instructor and we are thrilled to have him teaching our daughter!

​Matt was born and raised in Sudbury, Massachusetts and loves returning to the town to teach.  Although his downtime may be infrequent, when he is not touring or teaching, he might be found at his family’s cabin in Maine – a perfect backdrop for relaxation, rejuvenation and the inspiration to write an occasional song.