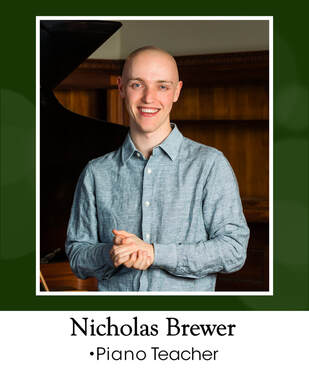 Teaching Philosophy: "The most valuable help I ever received as a student was being shown how to teach myself. As a result, I aim to foster the same in my students. I find the most powerful motivation for self-development comes from observing one's own improvement. Specifically with regard to the piano, I focus on cultivating one’s sound through honing musicality, practice methods, and one's mental approach. I hope to encourage in my students a passion for music and a lifelong relationship with their instrument."


Nicholas Brewer, former software developer, is a Boston-based musical and visual artist. As a pianist, he gave the world premier of Francine Trester’s "A Robert Lowry Reader" with Leanne Estabrook, soprano, in 2016. As a composer, he recently performed free music and electroacoustic music pieces at Longy School of Music's New Music Marathon. Additionally, he scored a 70-minute modern dance performance with electroacoustic music, performed in Portland, ME at the Portland Stage in 2015. As an educator, Nicholas is a committed teaching artist and seeks to incorporate teaching moments into all his performances. He strongly believes that everyone has the capacity to become a great musician, all that is required is awareness, introspection, and exploration.

An active collaborator, Nicholas sees working with others as the most rewarding form of music making. His recent performances have included stagings of Schubert's Winterreise, movie music retrospectives, and political commentary. He has performed at/in/on the Regattabar in Cambridge, MA; the Apple Hill Center for Chamber Music; Pickman Hall at Longy School of Music; the Everson Museum of Art in Syracuse, NY; Utica College’s Lunch Hour Series; Wellin Hall at Hamilton College; and Centennial Hall in Tucson, AZ.

Nicholas Brewer’s teachers include Donald Berman, Benjamin Hochman, and Sar-Shalom Strong. His alma mater is Hamilton College, where he studied Computer Science, Music, and Art. Nicholas received his Master's degree at Longy School of Music of Bard College. He is a member of the National Piano Guild. Nicholas has been teaching since 2015 and has been with Note-worthy Experiences since July 2017.

I wanted to write to say how delighted we have been with Nick's skillful, enthusiastic piano instruction. Over the years, Nick has proven himself adept at teaching on a variety of levels, having worked with both children and adults in our family. His positive attitude and communication skills ("people skills" in general) are excellent. In the past year, Nick has proven willing and eager guide us through music theory, composition, and technical skills, always adapting flexibly to his student's interests and ability. I cannot recommend Nick highly enough. He's wonderful, and we feel fortunate to have found him.

In his free time, Nicholas goes on extravagant cooking adventures, hikes, and plays board games.
Contact Us For Lessons