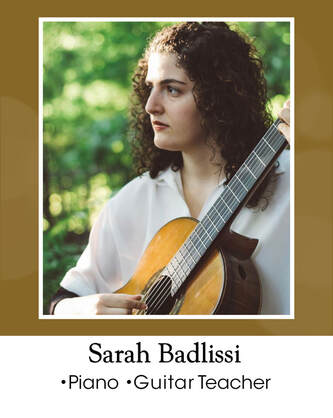 Teaching Philosophy: "In addition to playing music, I have always found that teaching music to others is very fulfilling and rewarding. When I teach, I like to create a nurturing environment that is also very fun and satisfying for the students. I believe that passion is key to creating art, therefore, I am confident that I can share my passion with the students and bring out the drive within them. I am offering lessons for anyone who is willing to learn, regardless of the age and background. Music is a universal language and I would love to share it with as many people as possible.

"I’ve been studying classical guitar for 8 years and have had experiences with it in both the US and Syria, where I grew up. Recently, I received my Bachelor of Music in Classical Guitar Performance and a Minor in Performing Arts Management from the Hartt School of Music, Dance, and Theatre. Throughout my education, I have learned skills such as performing, building a musical career, communicating with an audience, playing in chamber music ensembles, Music Theory, Piano, Ear Training, Teaching Pedagogue, how to deal with performance anxiety and much more. Furthermore, I value creating balance between teaching technique and musicianship in order to be a well-rounded musician. I believe that these skills will be valuable to students who want to pursue a career in music in the long run and to students who want to play music recreationally and explore all what music has to offer. What I find fascinating about music is the fact that the skills learned through it will be applicable to other parts in life, such as problem-solving, working with others, and having a desire to get better and share something exciting with other people.

"In addition to playing guitar, I tutored basic piano and ear training for three years. In terms of piano, I helped students work on repertoire, harmony, technique, learn hymns, learn basic left hand accompaniment patterns, and much more. As for ear training, I have experience with helping students learn sight-singing, how to identify and generate intervals, chords, and scales, and how to sing and play simultaneously.

"Not only will the students learn the instruments, they will learn the basics of Ear Training, Music History, and Music Theory as well. Music is already intertwined in our lives through movies, tv shows, video games, and much more, so why not learn about the art itself? If the students want to have fun and be challenged, then please consider taking a lesson with me."

Born into a musical family, Ms. Badlissi gave her debut performance at age seven at the Couvent des Sœurs Franciscaines de Marie in Aleppo, Syria, where she began her study of the guitar in 2006. She was a student of Georges Baly at the Baly Music Conservatory until relocating to the United States in 2010.

Ms. Badlissi participated in festivals such as the 2019 Hartt School Guitar Festival and the 2019 Cleveland Institute of Music Guitar Festival. In addition to performing well-known classics, she was a member of the ensemble that performed the world premieres of Clarice Assad’s composition “Dusty Grooves” (2017) and Nikita Koshkin’s “Storm Warning” (2020) at the New England Guitar Ensemble Festival held by the Boston Classical Guitar Society.

Other than playing solo repertoire, Ms. Badlissi is an active Chamber Musician as a member of a flute and guitar duo with flutist John Ray. The duo played in masterclasses for the PRISM Quartet and Cuarteto Latinoamericano. Currently, Ms. Badlissi is playing in a flute, guitar, and viola trio along with John Ray and Gris Moreno.

In addition to playing guitar, Ms. Badlissi tutored Piano and Ear Training at the Hartt School for beginner and intermediate levels for three years. She has experience in helping the students from different ages develop their sight-reading skills, build repertoire, understand harmony, technique, and much more.

Ms. Badlissi won the top prize at the 54th Annual Chaminade Music Club competition held in Attleboro, MA in 2016.
​
Ms. Badlissi just recently received her Bachelor of Music in Guitar Performance at the Hartt School at The University of Hartford under the instruction of Christopher Ladd. She also pursued a Minor in Performing Arts Management.  She has been teaching since 2017 and has been with Note-worthy Experiences since summer 2020.