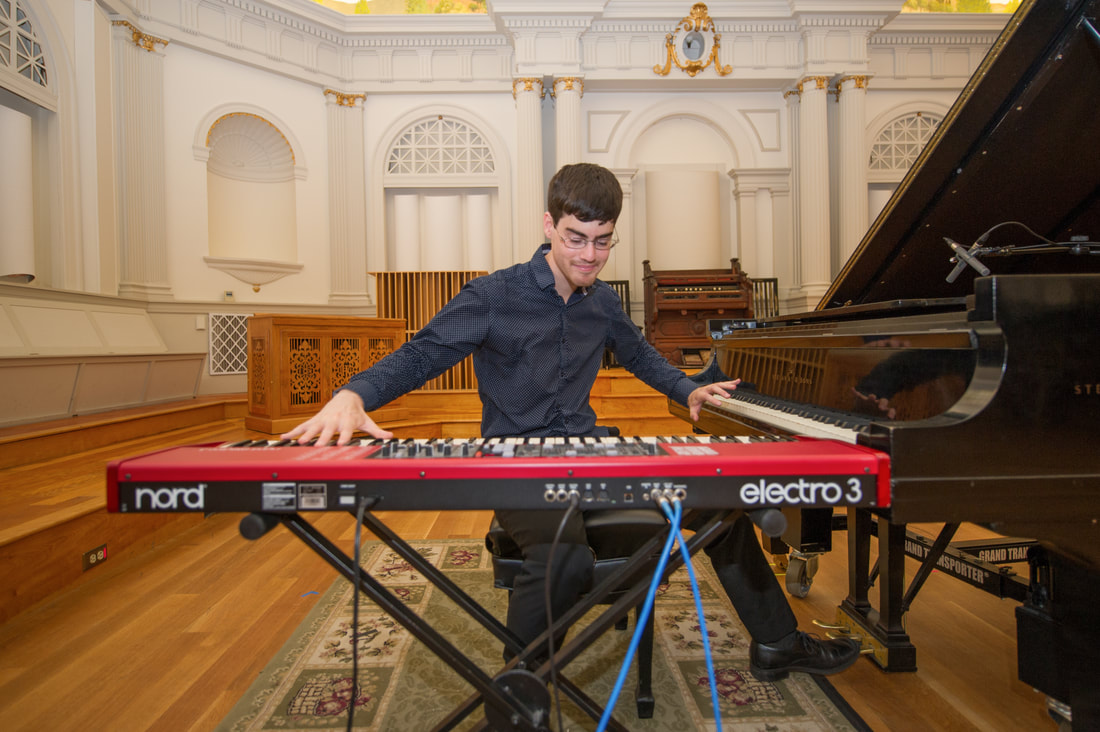 ​How old were you when you first started playing the piano?

​I was six years old and had taught myself nursery rhymes on a toy piano the first week.  That same week, my parents showed me what an upright piano looks like and I was amazed.  A year later, I started jazz.

Where did you live as a kid?

​I was actually born in Sudbury and lived there for the first ten years!  After that, my family spent one winter in Maine and then moved to a farmhouse in the Monadnock Region of New Hampshire.  That’s where I spent my teenage years, before I started at Berklee College of Music.

What is exciting to you about jazz, compared to other styles of music?

When I was little, I was always getting excited about big numbers, so at first I was amused to find out that bebop musicians could play for ten minutes straight at 300 beats per minute or more!  But as I got to know the music, I really learned to appreciate the spirit of improvisation that is central to jazz.  Each solo is based off of the chord changes of a jazz standard tune, with the form repeated several times, in a “theme and variations” pattern.  Plenty of classical pieces have this intensity too, but one has to keep this energy up in just about every jazz tune!

How do you introduce piano students to jazz?

For a student’s first jazz tune, I like to start with a piece that involves staying on one scale for a long time (the blues is one example).  It’s good to allow lots of room for improvisation, and to be able to suddenly have a sense of freedom from rules.

There is no average music show!  Concert venues come in many sizes, from the largest symphony halls and stadiums to the smallest dives- and I have played them all (except for stadiums).  Some places have pianos and some don’t.  Sometimes, there is lots of preparation for a show, but other times there is less organization and things get decided at the last minute.  The best way to handle it all is to just go with the flow.

What is the most amazing place you’ve played?

I played in Singapore as a child and recently did a recording in France… but the most awe-inspiring of all the opportunities has to have been my tours of Japan (with my Berklee friend Shota Ishikawa on bass).  Both of those tours resulted in recordings.  A lot of times, a jazz club in Japan will be smaller than its American equivalent – but packed with more concertgoers, who are listening very intently.  And many of these jazz fans have large vinyl record collections!

What is it like to travel between Boston and New York a lot?

First of all, I now know the subway systems of both cities like the back of my head.  There are lots and lots of trains involved.  And there’s also a lot of scheduling involved – getting to the Amtrak or bus station on time, finding the right restaurant in the right neighborhood, etc.  But most importantly, the best part is the music!

Who was an inspiring music teacher for you?

The late, great Charlie Banacos was a mentor to me in my teenage years.  He taught jazz in Beverly, MA and we would drive down from New Hampshire every week.  Every week, he would introduce me to some underrated jazz classics, as well as life lessons and moral values.

Since you play jazz professionally, what was the best popular music concert you attended that wasn’t jazz?

Oh, that’s easy – Green Day in 2010.  Every concert of theirs is a three-hour marathon of pure energy.

What are some of your favorite activities besides music?

I enjoy Asian food (especially if it’s spicy!), skiing all over New England, and swimming.

To learn more about Matt visit his Teacher Page.
​