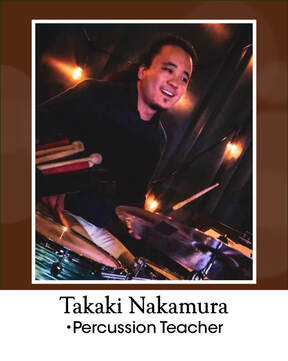 Teaching Philosophy:  "The core of my teaching style revolves around the fact that every student is different.
And not just when it comes to a  student's relationship with music, but rather that every student is fundamentally different as a human being from the next student. As such, it is my goal to customize my approach with every student, depending on who they are as not just a musician-in-training, but as a person. When teaching a new concept or subject to several different students who are currently at similar experience levels, I almost always find that each student progresses at different speeds. It is *never* the case that the slower students are less capable than the faster ones - it is always that those who are finding the new concepts harder to grasp simply need a different approach. It's important to understand that requiring a different approach does *not* equate to a lower skill level. After all, the alternate approach may not work for the student who found the original method easier. This comes down not to musical ability, but to who they are as an individual. Getting to know a student and how they process new information is key, and subsequently applying that to my teaching methods by adjusting the way I approach new and more difficult concepts, is the core of my teaching philosophy. I believe that every student has the same potential when provided a learning experience that has been molded to bring out their strengths."

Taka Nakamura never meant to become a musician. He was, instead, just about ready to go to college to pursue a degree in Biology, following the footsteps of his older sibling. Music was, however, always an important part of his life. He was involved in many bands throughout grade school, and just starting to break into the local gigging scene.
With an enrollment deposit already placed at the college he meant to attend, Taka discovered that a local music college offered a 1-yearcourse, with the option to transfer credits over to a 2-year course which would allow him to ultimately transfer credits and finish up a 4-year Bachelor degree at Berklee College of Music. The opportunity was too good to pass up, and he deferred his admission to his original college and gave the music college a shot.

Five years later and Taka had graduated from Berklee College of Music with a dual degree in Performance and Music Business Management. Throughout his years in Berklee, he has performed with various bands at numerous locations, from smaller bars and clubs to Fenway Park and Six Flags New England. He studied with many of Berklee's top percussion department faculty members, including the likes of Steve Wilkes ,Dave DiCenso, Tony "Thunder" Smith, Casey Scheuerell, and Mark Walker.

Taka has been teaching drums for over 10 years, and has teaching experience with students of all ages and skill levels. He is currently a member of Boston-based rock trio The Ben Cote Band, and the resident drummer and musical director at Faith Community Church of Hopkinton.​

​Taka teaches drums  for Note-worthy Experiences, where he started in the Fall of 2020.