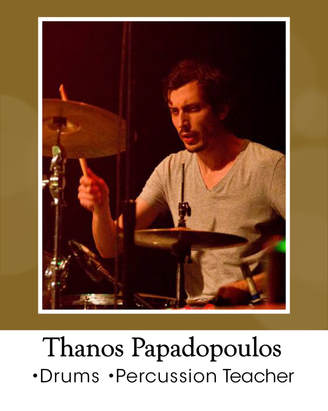 Teaching Philosophy: “My goal is to make my students play with a great feel and communicate with the other musicians while they are performing with a band. Getting out of your “ego” zone and connecting with other musicians on stage is what makes you a successful performer.
​
“I work on the fundamentals like drums placement and body posture, technique, understanding of rhythm, role of the instrument in a band and playing simple grooves with the right sound and feel which is the foundation of becoming a demanding drummer in the industry. For me it is very important that the student sounds right on the instrument, depending on the styles of music he/she performs whether that’s Pop, Rock or Jazz.

“My approach to every student is different as every student's learning abilities and goals are different. I work on a plan with the student and progress step by step according to his/her goals. A big part of my teaching philosophy is practicing with songs and playing with bass loops which is a great way to lock with a bass player and build your groove”.

Thanos Papadopoulos developed a passion and need for music from an early age. He bought his first keyboard at the age of six and began writing, learning melodies by ear. He is still as passionate today as he was then.

At the age of fourteen he joined Sindos Concert Band, a contemporary orchestra under conductor Miltos Polychronidis and began playing percussion and drums. They performed and earned numerous awards in band festivals across Europe, in countries like Luxembourg, Hungary, Italy, Czech Republic and many more. Some years later he earned his diploma in classical harmony.

In 2006 he began playing shows in major venues in Thessaloniki like Malt 'n' Jazz Club, Mylos Club and through the country with different artists. During his service in the military he got selected as a drummer and percussionist for "Alexander the Great C Corps Army Band N.A.T.O NRDC" and performed with the band in various events. In October 2012 he took part in the military parade celebrating "100 years by Thessaloniki's Independence," which was attended by the Prime Minister of Greece and high rank military personnel.

In November 2012 after completing his time with the army he decided to have an audition in order to attend Berklee College of Music in Boston. He was accepted and enrolled in May 2013 with a large scholarship and was also awarded a music scholarship, by the non-profit organization “U are what U do-Kostas Kouvidis”. Before his trip to Boston he recorded the single "New York in Sofia” featuring the world famous trumpet player and composer Pantelis Stoikos (Ivo Papasov, Giotis Kiourtsoglou, Milcho Leviev). The tune was a mixture of traditional Balkan folk music and jazz.

In May 2013 he began his studies in Boston majoring in Music Performance, and Music Production and Engineering, studying under performance greats Dave Di Censo, Ralph Peterson Jr., Kenwood Dennard, and multi–Grammy award winning producer Prince Charles Alexander. During his studies in college, he taught as an assistant classical harmony, solfege and music production, and performed with professors in and out of college.
In May 2014 following an audition he got selected by the American punk rock band the "Burning Streets" and they toured along with legendary punk rock bands like the Dead Kennedys, the GBH, and Reagan Youth. They performed in historical Rock venues in the USA like the Irving Plaza, Gramercy Theater in New York City, Theater of the Living Arts in Philadelphia, Reggies in Chicago, and Rock n Roll Hotel in DC. Bands that have previously performed in these venues include legendary names in Rock music like Nirvana, U2, Paul McCartney, the Foo Fighters, Coldplay, Oasis and many more. This way he established himself as the only Greek drummer in history to have ever achieved this with an American Rock band.

In May 2015, with his classmate Alkis Nicolaides, after being chosen by video producer Norman Lang they composed the music for the short film working with multi-Emmy award winning cinematographer Rick Macomber, Boston Casting Media Performance founder Lisa Sobel and director Pearl Lung. The film screened at Kendall Square Theater for Boston 48 Hour Film Festival the earning strong impressions.
In June 2016 in order to record his single, “The Speaking Mind” he formed the band “Under Orders” with Daniel Patino, Sean Frawley, and Tanveer Haquee. The song was recorded, after being selected, by British audio engineer/producer Matthew Ellard (The Clash, Elliot Smith, Mighty Mighty Bosstones). In October 2017 he filmed and wrote the music video for his single.

The song was released on November 1st of that year receiving great critical reception with the words “Great rocking tune and genuinely great video!!” by Sean Slade, producer of famous rock bands like Radiohead, The Pixies, Weezer, and Lou Reed. He currently teaches Performance and drums at School of Rock and performs as a professional drummer.

Thanos has been teachings since 2002. He teaches drums and percussion for Note-worthy Experiences, where has has taught since December 2018.