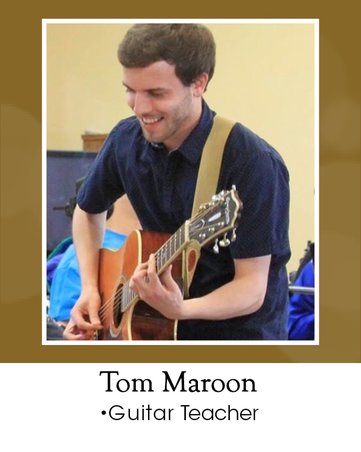 Tom Maroon is a Boston-based songwriter, guitarist, and pianist. Growing up outside of Pittsburgh, he began taking piano lessons at age six before switching to guitar a few years later (upon discovering The White Stripes!). He developed a strong background in contemporary styles of music like pop, rock, and R&B. Fusing those influences into original compositions, Tom began performing as a singer-songwriter in high school and went on to study songwriting at Berklee College of Music. Since graduating magna cum laude with a degree in music, he has continued to perform as a solo artist and work with a number of local bands, including rock band Red Right Hand and electronic band This Bliss. He even returned to the piano as the keyboardist for This Bliss! Tom also hosts a weekly radio program in Cambridge, "The Feedback with Tom Maroon," on which he reviews and discusses new local music. When he's in the Pittsburgh area, he volunteers as a camp counselor and music instructor at the Woodlands Foundation. There, in July 2016, Tom created and taught a course on songwriting to adults with disability and chronic illness. Tom has been teaching since 2015 and teaches guitar and ukulele for Note-worthy Experiences, where he has taught since April 2017.

​Tom Maroon has been teaching our daughter Layla, age 8, guitar for about 2.5 years. His easygoing personality coupled with his enthusiasm and knowledge of guitar and music in general makes him a wonderful teacher. Layla is able to practice all genres of music including her own melodies along with popular songs. Tom willingly takes her ideas and turns them into successful lessons, while also incorporating his own appropriate and applicable music choices and educational activities. We have recommended him as a guitar teacher to friends, and we find others are equally impressed by Tom.

Tom Maroon has really inspired our son with his guitar teaching.  Tom keeps it fun and new each session and he relates well to young players.  The classic rock selections, particularly the Beatles, are spot on.  Our son looks forward to Tom coming each week.

-Jon from Sudbury
Outside of music, Tom enjoys hiking and most things comedy-related. He's also a passionate hockey fan!
CONTACT US ABOUT GUITAR LESSONS