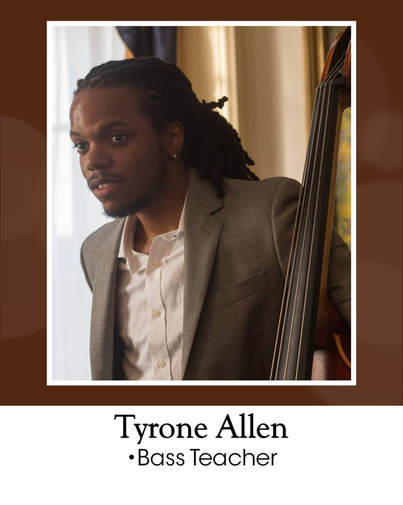 Tyrone Allen began his musical journey on recorder at the age of three. Taking instruction from his father, who taught in the District of Columbia public schools, Tyrone developed an ear for many genres very early on. He was constantly being exposed to new music, with a variety of different albums always being played at home.

Hearing R&B and Rock and Roll enticed Tyrone to pursue the guitar. After beginning lessons, his guitar teacher introduced him to musicians such as Carlos Santana and Eric Clapton. From there, Tyrone became fascinated with Jimi Hendrix, B. B. King, and Stevie Ray Vaughn, and began learning as many of their songs and solos as he could. Eventually, he began to play the electric and upright basses that his dad owned, and soon gravitated more towards bass.

Tyrone began playing upright bass in his High School String Orchestra and Jazz Ensemble and electric bass at his local church. He also performed in the Wind Ensemble and played djembe in the African Dance and Music Program.

While studying at the Eastman School of Music, Tyrone played at many venues with various groups in Rochester, New York. In the Spring of 2017, he received a Bachelor of Music in Classical Bass and Jazz Bass, under the instruction of James VanDemark and Jeff Campbel. In the Fall of 2017, Tyrone began attending the Berklee College of Music, pursuing a Masters of Arts from the Berklee Global Jazz Institute.

When at home in Temple Hills, Maryland, Tyrone continues to play for his church, restaurants, and bars in nearby D.C. and Baltimore. Some of the places he has played include Blues Alley, Twins Jazz Club, Bohemia Caverns, and the Kennedy Center. ​