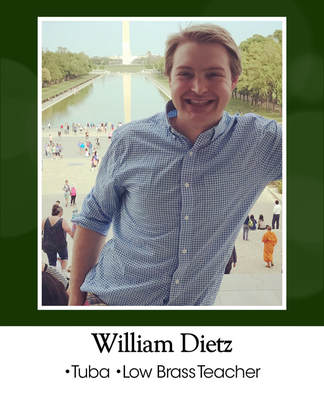 Teaching Philosophy: "I believe every student is an individual and should be taught like one. No one student learns the same way and that's why I believe teaching my students differently in a way that best suits them is important. I also take a strong view on making music first and foremost even when learning the fundamentals of playing."

William R. Dietz, born in Boston, Massachusetts and raised in Yarmouth, Maine is a professional tuba player based in Providence, RI. He has performed in many different groups across New England including the Portland(Maine)Symphony Orchestra and the Bangor Symphony Orchestra.

William attended the University of Rochester's Eastman School of Music receiving a Bachelors Degree in Music Performance in tuba in 2012. While at Eastman he performed in orchestras, wind ensembles, chamber groups, operas and many other groups while also taking additional classes in Composition and Conducting. After Eastman, William attended the prestigious Yale University School of Music receiving a Masters Degree in Music Performance in Tuba in 2014. William had the opportunity to play under many world renowned conductors at Yale including Peter Oundjian, Krzysztof Pendericki and James Conlon. During his time in school William attended the National Symphony Orchestra Youth Summer Music Institute, the Bay View Music Festival, the Siena Music Festival and the Bar Harbor Brass Week Festival.

In addition to performing, William continues to teach and educate students of all ages. He is currently on faculty at the Rhode Island Philharmonic Orchestra and School of Music as a tuba and euphonium instructor and private tuba instructor for Note-Worthy Experiences in Massachusetts. In 2010 he worked at the Maine Youth Summer Music Camp in Orono, ME as the euphonium and tuba instructor. At Yale he was hired as a tuba and euphonium instructor by the Yale University Department of Music for undergraduate students. He continues to also work as a low brass coach for the University of Southern Maine Youth Ensembles, the same group he performed in as a young student many years ago.
​
Aside from his extensive music career, William is also a skilled music and medical administrator. He worked as the Administrator Intern for the Portland Chamber Music Festival in 2014. He also worked as a Clinical/Operations Assistant for the City of Portland, ME Public Health Department School Based Health Clinics, later becoming part of Greater Portland Health in Portland, ME.
In his free time William is an active runner, cook, amateur squash player and Golden Retriever admirer.

William has been with Note-worthy Experiences since September 2018.
WILLIAM'S WEBSITE