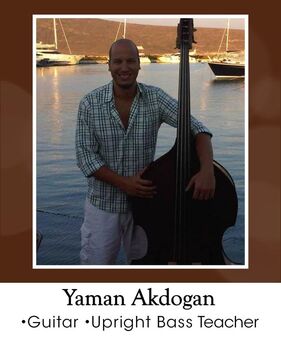 Teaching Philosophy: "First and foremost, I try to discover my students musical interest. What excites them musically  is what will inspire them to practice, so I try to focus on the songs, styles, bands and musicians they like. Then I create a structure and a plan to make them reach their musical goals in a most efficient, quick and fun way. For my younger students under the age of 10, I enjoy creating little games that would help them to improve their sense of rhythm, pitch and musicality. For example; most of my young students love the metronome application that I use on my ipad which has the sound of a monkey, I make them march with their feet to the sound of the monkey, that way they experience and internalize the rhythm in their body while having fun at the same time."

Yaman Akdogan is a Turkish-born bass player living in Boston. He began playing guitar in middle school where he played in different rock bands, and then switched to bass in high school.  After borrowing some jazz recordings from his pianist friend, he started becoming more interested in jazz music. After his high school graduation, Yaman was accepted as a Laboral Economics major at Dokuz Eylül University in Izmir, Turkey. While completing his studies in college, he studied jazz music theory and performance privately, with well-known jazz pianist, arranger, and educator  Omur Gidel. He performed in jazz clubs and festivals with different local bands around Turkey.
​
In 2008 he participated in the Berklee College of Music's Umbria Jazz Clinics in Perugia, Italy and studied with Grammy award winning bassist Oscar Stagnaro. In the same year he participated in Berklee's auditions in Athens, Greece as an accompanist bass player. After being recognized by the audition team he was invited to audition himself and was ultimately accepted by Berklee as a scholarship student. In 2010 he received a scholarship to participate in Sienna Jazz Academy Summer Program where he studied with the great jazz musicians Avishai Cohen, Ferenc Nemeth, Scott Colley, Paolino Dalla Porta, Anders Jormin, Ricardo Del Fra, Furio Di Castri, Marco Tamburini, Francesco Petreni, Mario Raja,  and Ettore Fioravanti.

Learn more about Yaman in his teacher feature.

Yaman has been working with both of our children (ages 6 and 9) providing guitar lessons. Both of our children immediately felt at ease with Yaman and always look forward to their weekly lesson.  He greets them with a big smile and seems to genuinely love teaching them.  Yaman is encouraging, outgoing, patient and enthusiastic.  In less than a year both kids have learned a great deal from him and, most importantly, he has helped to foster their love of music. We are so grateful for his work!