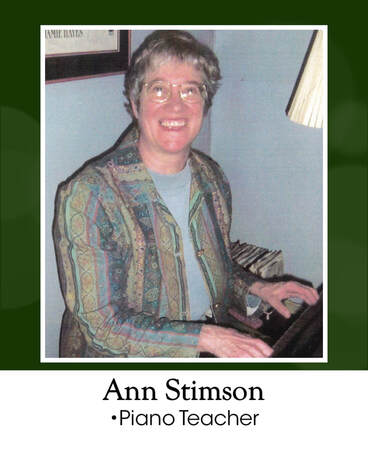 Teaching Philosophy: "In good times, music is a source of joy; in tough times, it’s a great comfort. I think one of the reasons that playing an instrument is so absorbing is that it makes intellectual, emotional and physical demands on the performer. There are so many ways to connect with music and as a teacher, I try to include as many as I can.  Music has so much to teach us: the power of artistic expression, the ability to heal individuaIs and communities, and the confidence that comes from sustained effort. For me, playing music means learning several languages (styles) at once. I don’t think one style precludes another, so my students get a blend of different styles, including ones they have chosen. Note-worthy places a high priority on community outreach, which is also a part of my musical life. In my experience, students “get” the notion that this kind of performing is a gift which rewards both them and the audience. For me, lessons – and practicing – should combine effort, creativity and humor. I make a point of listening respectfully to each student: to learn their interests, both musical and extra-musical, to pick up on their learning style and sort out how to best encourage them and support them in their musical goals."

One of Ann’s happiest early memories was improvising, along with her two younger brothers, on an old upright. The bench could only fit two children, so the third was always falling off one end and racing around to get on the other end. At six she decided to be a composer, partly inspired by Moussorgsky’s “Night on Bald Mountain” and the accompanying album cover, showing the composer as a wild-eyed man with unruly hair and a green complexion. She owes a huge debt of gratitude to her first piano teacher, Esther Gillis, for her caring nature, great imagination and endless patience.

She holds a B.A. in music and sociology from Oberlin College and an M.A. in music composition from SUNY/Buffalo, where she studied with Morton Feldman. Her ten commissions include the first in the history of the Chromatic Club of Boston and a brass quintet -- an imaginary encounter between Giovanni Gabrieli and Dizzy Gillespie -- as well as chamber music and music for theater, film, dance and puppetry. Her music has been performed around Boston and in Chicago, Indiana, Iowa, Texas, Washington, D.C., and Paris. She has taught piano at the Performing Arts Center/Metrowest in Framingham since 2015. She did broadcast publicity for the late composer Ruth Lomon, and helped produce a forthcoming two-piano CD of works by 11 women composers, performed by Ruth and her colleague, Iris Wenglin. Her Caracas won an Honorable Mention in the 2017-18 American Prize chamber music composition division; Mirage for oboe and piano made her a Semi-Finalist in 2018-19. From 2015-19, she gave 16 performances at two Brookline elder housing sites, four Metrowest Councils on Aging, and, in Framingham,  at the Evangelical Lutheran Church, Brookdale Cushing Park, Barnes and Noble, and Café Sofa (the last two accompanying the Performing Arts Center Children’s Chorus).

Ann has been teaching for 30 years and is a member of the National Piano Guild. She has been with Note-worthy Experiences since August 2019.

​This composition is dedicated to my dear husband, Don Bishop.

Despite my usual love of snow, there were times during the winter of 2014-15 when everything seemed impossible, dangerous or cancelled. After weeks of complaining it hit me that I could actually do something -- take a free mental vacation by writing music about somewhere tropical. So here is "Caracas." I've never been there but am pretty sure this music doesn't sound like Sweden.
Fasten your seat belts!
CONTACT US ABOUT LESSONS