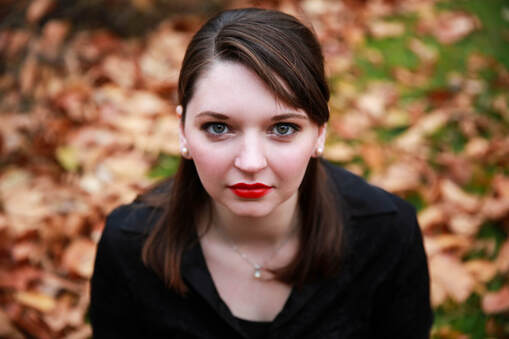 How old were you when you first got interested in singing and when did you start voice lessons?

I didn’t start formal singing training until I was 11 years old and was asked to sing in a girls’ choir. It was a really good choir, and the highlight of my childhood, but I didn’t begin private lessons until just before college auditions. In some ways that was very challenging, and I think voice and piano lessons as a child would have helped a lot. Still, I just loved singing and was happy to be making music!

I really like my current teacher, Pam Dellal. She is very empathetic, but challenges me to always keep improving. And she can make me understand a song in a completely different way in about five minutes of coaching. I was inspired to study music in college by my first choir director in Florida, Claire Hodge. She has such a great personality and made sure that rehearsals were a combination of hilarious fun and hard work, and the concerts were immensely rewarding.

What is your favorite genre of music to sing? To listen to?

I specialize in singing Early Music, and I love it. I like to listen to Early Music, of course, but also indie folk, folk rock, and 1940s swing. I especially love finding local bands that fall into those or similar categories.

What is Early Music and what is it like to sing it?

Early Music is basically classical music written before 1800, going back to the Middle Ages. Specializing in Early Music involves a LOT of research, and because the music can be so obscure, there aren’t a lot of performances to imitate, so you really have to make strong decisions and make it your own. I also get to sing in a lot of variations of languages – Old French, French Latin, Occitan, German Latin, Baroque French, etc.

I was a total choir nerd as a kid (being a nerd is cool!). I took my choir music home to practice and sometimes learned the other voice parts, just for fun. However, I didn’t always have a clear goal in mind when practicing. And even in college and grad school I would try to spend as much time in the practice room as possible, but didn’t always know exactly what I was trying to accomplish, which is less efficient. Now I enjoy practicing a lot more because I know what I want to fix and I have a little box of (metaphorical) tools I can use when I want to do something better and don’t know exactly how yet.

I’ve had too many memorable performances in the last few years to pick just one, so I’ll pick one from when I was a child. When I was 16, my choir got to tour Central Europe, and we sang a concert in Prague – a U.S. Ambassador was there and we were pretty nervous. The concert went well, though, and at the end, we sang a Czech Christmas carol. The audience sang along with us, even though our Czech could have used some improvement, and the lights went off and silent fireworks started raining down outside. None of us knew this would happen and it was one of the most magical experiences I’ve ever had.

What is your best advice to students who want to learn a new instrument or improve their singing?

First of all, just try it! I almost said no to joining that choir in sixth grade because I was nervous, and I can’t imagine how different my life would be now if I had. Sometimes learning to sing or play an instrument can be tough, even frustrating, but if you practice and perform joyfully (and playfully!), it can change your life in the best way possible.

When you’re not performing or teaching what other hobbies or interests do you have?
​
I teach ESL to students and business professionals, and I love it. I like to read fiction and poetry, and I enjoy watching Netflix with my husband and our two cats and one dog. I also enjoy cooking and photographing my food for Instagram. No shame.

Want to come to London to hear me sing some Italian opera in July? I kid. But seriously, I’m so excited to sing a role in a UK premiere of a VERY obscure Cavalli opera this summer. A little closer to home, I’ll be singing some early music in Marblehead on July 13th at Church of St. Andrew. I’ll also be performing in another concert there in August, details TBD.
​
Anastasia holds a Master’s Degree in Early Music from Longy School of Music, where she studied with Laurie Monahan, and a Bachelor’s degree in Music from Mercer University in Macon, Georgia, where she studied under Dr. Richard Kosowski. Currently she is a student of Pamela Dellal. Read more about Anastasia on her Teacher Page.
contact us about lessons