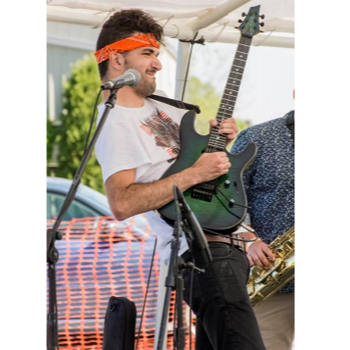 ​How old were you when you first got interested in musicand when did you start teaching?

I had always been exposed to music from a very young age; both my parents were music lovers, and my dad was a semi-pro guitar player, playing in bands around Boston in the 1980s.

Although I was interested in music (and dabbled with piano for a few years in middle school) I did not think it was something I could "do" until I was about 15 and made the decision to start teaching myself guitar. It was so hard at the beginning that I almost gave up!

I took lessons for a few weeks at the beginning just to make sure I was holding it right, but after grasping the fundamentals, I figured I could do it myself - I've always been bad at sticking to the plan!

I started teaching professionally in early 2010, my senior year of high school, and haven't stopped since. I teach all ages and backgrounds and love every minute of it.

Due to the nature of the guitar, I can play all the fretted stringed instruments relatively well, as the technique is mostly the same. I can play bass just as well as I can guitar, and am quite capable on mandolin and ukelele, but banjo still confuses me - I'm working on it!

I actually started on piano in middle school, and in college they mandated that everyone took piano lessons as well, so I have some basic experience with that, and can play a few simple pieces. I am also a pretty decent (and very loud!) drummer.

I was pretty much completely self taught until college, so this is a tough question! I had the privilege of studying with renowned jazz musicians Ray Vega and Jason Palmer, and they definitely left a mark on me in terms of pulling many elements from various musical traditions, while at the same time always pushing to develop your own personal sound instead of emulating others. Their lessons on maintaining a creative spirit are a huge influence on who I am as a player today.

What is your favorite genre or music to play?  To listen to?

Tough question! I listen to literally everything, from classical to pop to metal to weird experimental stuff. I try to maintain this reflection in my playing and do a little bit of everything - my own music is definitely more in a rock kind of style, so I guess that is the most near and dear to my heart.

When I first started, I made a point of trying to practice at least one hour a day and then taking a break. That was the bare minimum requirement I forced myself to stick to, although I would often do more if my hands were feeling good that day, sometimes up to three hours or more.

Now that I am a professional, my practice habits have not changed, but the kinds of practice I do has. My focus now is less on mastering repertoire and concepts, and instead actually training the skill of creativity, and working on improvising and writing more ideas out of nothing.

Because I play an electric instrument, another important part of my practice is sound design, and just trying to create different tones and sonic palettes with the instrument, and using the guitar technology as an instrument as well vs. something you just plug into

I still work on more repertoire, and learn new theoretical concepts, but my focus is more on sounding like myself and playing what I hear in my head.

One thing that never changes, however, is the fundamentals. Most of what I practice still revolves around having good time feel, good tone, and staying relaxed while playing. That stuff never goes away and is the foundation of advanced technique.

It's hard to pick one! I have done so many shows over the years and they have all had something great about them. One huge highlight that stands out was having the opportunity to perform at Times Square for thousands of people in 2015.

Freevolt, my current group, recently opened for funk legend George Clinton last year and that was an amazing experience from start to finish.

One of my favorite things about working with young musicians is that often times, they already have a strong idea in their head about what they want to sound like, they just don't know how to articulate it. Because they haven't been molded a certain way by years of playing already, they are already approaching the instrument with a certain sense of freshness. Having the chance to work with them and be able to cultivate this to develop the student's creativity and watch them come up with ideas I never would have is hugely rewarding.

Break everything into the tiniest chunks you can and play the chunks at a speed that you can play it smoothly and comfortably. Once you have that, make it slightly harder, and rinse and repeat until you have it mastered. Don't torture yourself by trying to play a hard piece right off that bat. Take it one bite at a time and you'll be cruising soon!

Does making music count as a hobby? I make some electronic computer music on the side; and I've done some light soundtrack work here and there. When I'm away from music completely, I very much enjoy spending time outside and hiking with my dog. I also enjoy a good book and/or video game from time to time. I just picked up a biography of Derek Bailey, a phenomenal underground guitar player from England. Can't put it down!​
Learn more about Nicco on his Teacher Page.
Contact us about Lessons