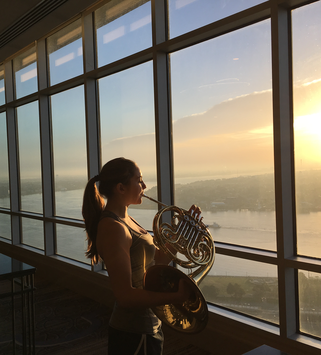 How old were you when you first played the French Horn and why did you choose it?

I actually began playing the french horn rather late, and funnily enough I never actually chose it for myself - it just kind of happened! Up through early high school, I sang in a wonderful children’s choir, the Appalachian Children’s Chorus. With the close of my freshman year, I realized that I just couldn’t continue in choir due to its demanding schedule, so I decided to pick up my dad’s old trumpet. I had played it briefly in middle school, but wanted to give it a more serious try, so I decided to audition for a local youth orchestra. Imagine my humiliation when I, a high schooler, was placed in a little kiddie group! My audition was awful - I had never taken private lessons and I was a nervous wreck in front of the audition panel. But, luckily for me, one of the administrators of the youth orchestra bargained with me - “switch to French Horn and I’ll not only move you up to the high school orchestra, I’ll throw in free lessons to top it off!” By the end of my first year of lessons, I knew I had found something I wanted to pursue.

I grew up taking piano lessons, but I haven’t seriously practiced in years. I’d love to get back to it!

What is Solfege Singing and how is it different from other voice lessons?

Solfege singing is more of an effort in developing the “voice in your head” than it is learning how to sing with a beautiful tone. When you read music, especially as a wind instrumentalist or singer, it is best if you can “hear” the music in your head before you play (or sing) it. Solfege is different from other voice lessons in that it is not focused on developing the outer singing voice, but rather that inner singing voice that you hear in your head when you read music without singing or playing aloud.

What is your favorite genre of music to play? To sing? To listen to?

My favorite genre of music to play has to be music of the early romantic period - playing a Beethoven symphony on the horn is one of the most fulfilling and exciting experiences! I enjoy singing more modern music, especially anything with a little jazz influence. Since I grew up in West Virginia, I enjoy listening to anything with a bit of a folky influence, as well as pretty much any genre stemming from rock and roll. I grew up listening to a lot of the Beatles, so I hold a special place in my heart for their music.

I must confess, I was a terrible practicer! Every time I sat down to practice piano as a child, my mind would wander and I would end up creating my own music instead of practicing what I should have been working on. In high school, when I was playing the french horn more seriously, my only saving grace was that I usually took lessons twice a week. When I got to college, I realized how awful my practice habits were and put a serious effort into changing them. Over time, I’ve come to realize that good practicing is not about more time spent in a practice room, but rather more focus put into the practice.

A couple of years ago, I was performing in a series of school shows with a brass quartet. One school in particular was extremely large and rowdy, and we were having a really hard time keeping the kids focused on our presentation. A couple songs in, however, we started playing “Let it Go”, from the movie Frozen; suddenly, every single kid in the room started singing with us and sang along with us until the very end of the song. It was an almost magical experience - about two hundred kids singing at the top of their lungs while we played along in awe. I had a hard time keeping a straight enough face to play my horn. For the rest of the show, they were noticeably more focused and interested in what we had to say. Afterwards, we got the most questions from the audience compared with any other school we performed at that week, and a whole crowd of kids came up to thank us and tell us how much they loved the show. That day really stuck with me, and showed me how meaningful a performance can be when musicians make an attempt to connect with their audience.

There is nothing more exciting than witnessing a young musician realize what they are capable of doing. Seeing a student surpass their own expectations of themselves is one of the most deeply fulfilling and inspiring experiences I’ve ever had.

Don’t ever get discouraged if you don’t see improvement in one practice session - consistency is what brings us improvement! Just 10 minutes of practice a day is better than an hour of practice once a week. Over time, you’ll start to notice small improvements in your abilities, and that’s when learning an instrument gets exciting. Being able to do something better today than you could last week is so much fun!

On June 30th, I’ll be playing a really fun outdoor concert with the Massachusetts Orchestra in Worcester’s East Park. Fireworks plus music, anyone?

When you’re not performing or teaching what do you like to do?

​When I’m not performing or teaching I really enjoy active hobbies such as running, weight-lifting, hiking, and yoga.

Learn more about Julia on her Teacher Page.
​
Julia  is a freelance horn player based in the greater Boston area. Born and raised in Charleston, West Virginia, she had her first professional orchestral experience performing with the West Virginia Symphony Orchestra at the age of 17, after picking up the horn at 15. Having been greatly impacted by this and other orchestral experiences, Julia decided to pursue orchestral music professionally, and obtained both her Bachelor’s and Master’s degrees from the New England Conservatory.
Contact us about Lessons