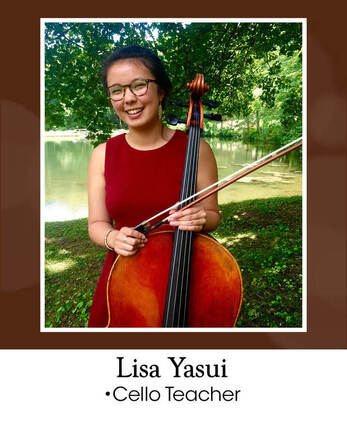 Teaching Philosophy: "I believe each student is unique, and has something special to contribute to their education. I strive to create a creative and safe environment for each student to learn and grow, and to eventually create their own sound."

Lisa Yasui is a Boston-based cellist, performing classical music regularly in the area. Born and raised in South Florida, she began her cello studies when she was 8 years old. Lisa continued her studies by attending Alexander W. Dreyfoos School of the Arts, a prestigious magnet arts school ranked top in the nation. She also participated in the Florida Youth Orchestra and Miami Music Project Honors Orchestra, sitting principal for all ensembles she was engaged in.

In 2012, Lisa moved to Boston to study Cello Performance with Michael Reynolds at Boston University. During her undergraduate studies, she participated in the Boston University Symphony and Boston University Chamber Orchestra, as well as the Boston Philharmonic Youth Orchestra. She has played in notable concert halls  such as Symphony Hall, Carnegie Hall, Berliner Philharmonie, KKL Luzern, and Rudolfinum – Dvorak Hall. She also attended Brevard Music Center, Music in the Mountains, Montecito International Music Festival, and Aria during the summers. In these ensembles, she has worked with accomplished musicians such as Itzhak Pearlman, Natalia Gutman, Bela Fleck, Keith Lockhart, and Benjamin Zander. Additional teachers during her undergraduate experience include Michael Haber, Benjamin Karp, Mihai Tetel and Stan Sharp.

During her last two years of her undergraduate studies, Lisa taught group lessons with Josiah Quincy’s Orchestra Program through Boston Philharmonic’s El-Sistema program Crescendo. A year later, she also taught as an assistant at Boston Youth Symphony Orchestra’s Intensive Community Program. During those two years, Lisa knew she wanted to continue teaching after she graduated. As a teacher, she hopes to help students discover a passion for music through a well-rounded curriculum that balances a strong emphasis on technical proficiency through the Suzuki method, while simultaneously developing a student’s own individual sense of creativity through explorations of composition and non-classical types of music.

Lisa graduated from Boston university in the spring of 2016 with a Bachelor of Music degree in Cello Performance with a minor in Arts Administration. She now plays with the Boston Civic Orchestra as assistant principal and works as an Administrative Assistant in the Rental and Sales department of Johnson String Instrument and as the Development Coordinator at The Handel and Haydn Society. Lisa has been teaching since 2014 and has been with Note-worthy Experiences since February 2017.

In her free time, Lisa enjoys trying different food around the Boston area and learning brush calligraphy.
CONTACT US ABOUT Lessons