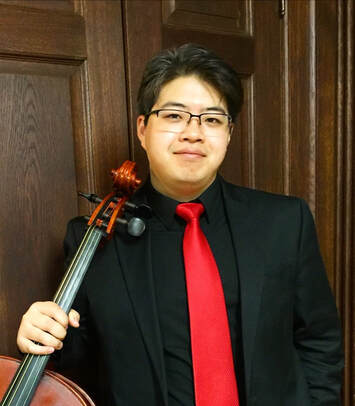 What is your favorite genre of music?

​Classical will always be my favorite genre of music since it’s my passion and my life. BUT, a very close second would have to be Big Band/Sinatra. I may seem young, but I assure you I’ve got an old soul. I’d much prefer the compositional integrity from that genre than the music we hear on the radio nowadays!

My mother is a piano teacher, and naturally I began music lessons on piano around the age of 4, then later Cello lessons at 5. I continued music lessons with both piano and cello until age 16.

Why did you pick Cello after beginning Piano lessons?

​That’s a great question, because I actually never chose to play Cello. My mother always knew she wanted me to play some kind of string instrument when I was young, therefore after she started me on piano, she took me to interview for the Hong Kong Performing Arts Academy. After the interview, the Director at the time asked me what I was interested in playing. Since at the time most of my friends (who played an instrument) played violin, I wanted to follow suit. But, the Director had different plans for me and said, “Well, you’re a pretty big guy, why don’t you play cello?” Not knowing what a cello was, he subsequently explained that it’s like a “big violin”. I found out a few years later that the reason why I was recommended to play Cello was because they were in need of Cello students that year.

I was very fortunate to have studied with different teachers that nurtured both musical and physical part of playing the cello. Pamela Washburn Delisse was one of the teachers whom I had studied with the longest. She had always challenged me into creating the most musical phrasing, and to not be afraid of exploring different musical approach. James Holland was the teacher who put me into technical foundation reformation, allowing me to perform and execute my ideas with ease. Everything I am from ground up, I owe it all to them!

I must say, there were two performances in which I felt was the most memorable. In fact, the two performances I had ever literally cried as I performed. In 2009, I had the privilege to perform in the Sydney Opera House in Australia. In the beginning of the program, we played the Australian Anthem to show our appreciation to be in their country. As the music began, the entire 3600 audience stood and started singing along with the orchestra. If you’ve seen the design of the hall, then you’d know that the stage was in the center of the surrounding audience. Imagine 3600 people singing along and all around you. Tears immediately fell from my eyes. The other performance I had shed tears for were in 2014 in Houston, Texas. I was performing Mahler’s Symphony No. 2 aka Resurrection. During the finale movement of the piece, the entire chorus sung passionately with the orchestra. The words were simply put, inspirational. At the reception after the concert, audience members came up to me and told me they started to cry when they noticed my tears streaming from my eyes.

What distinguishes your teaching from the other teachers?

​First and foremost, I’m human. Then, I’m a musician, and cellist. What I teach is not just music, but also critical thinking and problem solving. My goal for each and every student that comes to my door is for them to leave with these important life skills. Reading music, playing the cello, and performing is easy. It’s how you get there, and the thought process is what really matters. It doesn’t matter if you want to become a musician, or any other occupations in life, but if you don’t learn to use critical thinking and problem solving, your path to success will become much more difficult.

What is your advice for students who want to learn a new instrument or improve their playing?

Patience and Persistence. It sounds simple, but it is terribly difficult to achieve. There were many frustrating times throughout the refinement of my craft, but no matter what, I refused to give up. Both in life and in music, success doesn’t come from luck and chance. It comes from being patient with what you are achieving and being persistent even in times of negativity. We live in a tough world and is getting tougher by the second. It is up to us to change that.

When you are not performing or teaching what do you like to do?

​I enjoy cooking and listening to Frank Sinatra. I’ve recently also been exploring some Latin piano playing for my own pleasure!