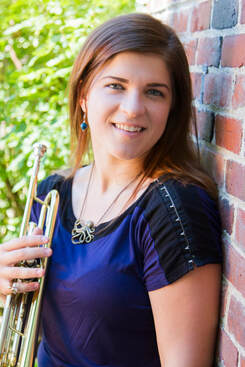 What different instruments do you play?

My main two instruments are the trumpet and the violin.  I started playing the trumpet in the school band in 3rd grade.  It actually wasn’t until quite a few years later when I first started playing the violin.  I was drawn to violin due to fiddle tunes, especially traditional Irish music, but also supplemented it with classical repertoire.  I’ve done some doubling here and there on similar instruments, like on the French horn, but it’s definitely helpful to have a background in both brass and strings.  Those two proficiencies can complement each other very well.

I’ve played a lot of ukulele and guitar in classroom settings, although I’m definitely not a guitar expert or virtuoso.  They are great teaching tools though! I’ve also used typical classroom instruments like hand drums and xylophones in my teaching.

I’m also an amateur percussionist.  I’ve played in a group called aNova Brazil (formerly known as Grooversity), which performs AfroBrazilian percussion music, like samba reggae.  That’s a lot of fun! I’ve also studied at the Dagbe Cultural Centre in Ghana for 3 weeks, where I learned Ewe dance-drumming. I still perform here and there in a show called “Ideas Not Theories,” which is more of a theatrical percussion show.  We play on “non-traditional” instruments, like bicycles, water buckets, and our own bodies.

During grad school, I took vocal lessons.  While I never considered myself a “vocalist,” it has hugely helped my musicianship, and has even helped my projection and vocal health as a teacher.  I’ve definitely taken the time to explore a lot of things musically, which has only helped to increase my knowledge base and understanding as a musician.

What is your teaching background?

I’ve completed two degrees in Music Education, and I currently hold DESE licensure in the state of Massachusetts to teach all levels of Music, grades PreK through 12.  This experience has helped me to learn about teaching philosophies and how to best implement them with my students. During my student teaching, I worked with a great mentor and studied Music Learning Theory, a research-based approach to teaching music, based on similar principals to language acquisition.

While some people may consider themselves performing musicians who teach to support themselves, I view performing and education both as equally important aspects of my career and identity.

I’ve taught in many different institutions in Massachusetts, such as: Dedham Public Schools, Natick Public Schools, Lexington Public Schools, UMass Lowell, The Boston Conservatory, The Boston Latin School, The Fessenden School, and Medfield Public Schools.  I’ve also spent 2 years teaching abroad – during the years 2017 and 2018, I worked as an orchestra teacher at a school in Kenya called Mount Kenya Academy. I currently teach students who are anywhere from age 4 through adult learners.

What’s your favorite type of music to play?

From my formal music studies, I have a background in “classical” music, also known as orchestral music or Western European Art Music.  I’ve also played in jazz bands, marching bands, pit orchestras, and chamber groups, among others.

Nowadays, I play fairly regularly in pit orchestras for different musical theatre productions, which is one of my favorite types of gigs.  I love being able to honor my students’ musical tastes by learning and performing the type of music they like. I find that students are most motivated by playing the music they WANT to play, and I encourage my students to share their favorite music with me so we can bring their interests into our lessons.

Who are your musical role models?

Perhaps my biggest role model is Peter Seeger, for many reasons.  He used the banjo as an instrument of social change and activism, and tirelessly advocated for access to music and music education for all.  He stressed the importance of folk music and community music, of being able to create music together as a society. Music is for EVERYONE, regardless of your age, income, race, background, and prior abilities.

I also am a big fan of David Amram, a composer, jazz French hornist, and friend of Jack Keroauc, whom I actually had the pleasure of meeting when he visited UMass Lowell.  Amram has traveled all over the world and studied many different instruments and musical cultures. This is a dream of mine, as I love both traveling and learning about various types of traditional music!  Others who have followed the same path include Percy Grainger and Béla Bartók.

I really admire Leonard Bernstein as a musician and teacher.  I have a particular fondness for him since he composed the song I was named after (and he was from Massachusetts!), but he also really found a fantastic balance between performer (conductor) and educator.  His Young Peoples’ Concerts were great shows that made classical music accessible to everyone, especially children, without talking down to them or sacrificing the integrity of the music.

Of course, the music teachers I’ve had have also had an enormous impact on me.  My teachers at both UMass Lowell and The Boston Conservatory have taught me a lot about music, art, performing, and life.

What is your favorite type of music to listen to?

As you can probably tell, I’m a huge musical theatre nerd!  You can usually find me listening to show tunes. As far as bands, one of my favorite artists is Vampire Weekend.  If I’m in the mood to listen to orchestral music, my favorite composers are Camille Saint-Saens, Franz Liszt, Ravel, Tchaikovsky, and Beethoven.
I also really like folk groups, whether they’re more traditional acoustic folk, or more of an experimental/fusion group.  One of my favorite instrumental groups is called The Fretless. For any of my strings students – check them out! They really bring a new and fresh perspective to folk music.

What is your most memorable gig?

When I think of this question, I think of the most interested venues where I’ve played.  These often took the form of “flash mob” type gigs around Boston. Perhaps the most unique gig I’ve played has been with a group called Ideas Not Theories, which is a “theatrical percussion” show, and kind of has to be seen to be understood!

Otherwise, I have really enjoyed playing for huge corporate events, where we’ve gotten people wearing fancy suits or black-tie attire to get up and dance with us.  Or, I’ve loved playing in the pit for high school theatre productions with really talented teenagers. These shows are always special to me because I know the special bond that comes from being in a musical together, and I feel lucky to have contributed to that experience for the students.

What do you want students and their parents to know?

First, students’ success will increase exponentially if parents take an interest and involvement in their musical study.  This is a key component of the Suzuki Method, but it applies to any instrument and any area of study. As a parent, you don’t have to be an expert, or even a trained musician yourself.

I encourage parents to sit in on their students’ lessons.  Everyone’s life is busy, but even if you’re doing work on a laptop or taking care of another task, see if you can be physically present, or at least within earshot, of the lesson.  I bet you will probably learn something – about your teacher’s approach, about your student’s practice habits, even about the instrument that is being studied.

Second, to improve on your instrument, practice is paramount!  This seems simple, but it’s much harder to keep up the motivation and self-discipline.  In our modern world, we’ve become so used to instant gratification that sometimes we forget that we need to put in the work towards things!  Once of my professors once said “There are two things in life you can’t cram for: music, and crop planting.” Lessons are usually only once per week, and it is important to spend the time in between reviewing the material and skills.  Sometimes it requires a shift in perspective: instead of thinking of a lesson as a time to learn new material or practice something with a teacher, think of it as a time to “perform” for your teacher what you have learned and practiced since your last lesson.  If you ever feel stuck or want suggestions to help with practice scheduling and motivation, you can always ask me!

Finally, what I want parents to know: I am here for you as a partner in your child’s musical learning journey.  Whether they have aspirations of playing music as a career, or just want to enrich their lives by learning it as a hobby, I am here to help them reach their goals and realize the fulfillment that music can bring!

When you’re not teaching or performing, what other hobbies and interests do you have?

I love to read.  I’m not a super fast reader, but I try to get through at least one new non-fiction book a month so I can learn something new.  Another way I keep my mind active is by learning languages. I learned some Swahili when I was living in Kenya, and I like to at least learn some basic phrases in different languages whenever I travel.  In fact, I see a lot of parallels between music learning and language learning!
I like to stay active physically by going for walks (usually while listening to music or audiobooks) or doing yoga.  I also love traveling, and I’m usually thinking about where my next trip or vacation will be.

Read more about Maria on her Teacher Page.
Contact us about Lessons