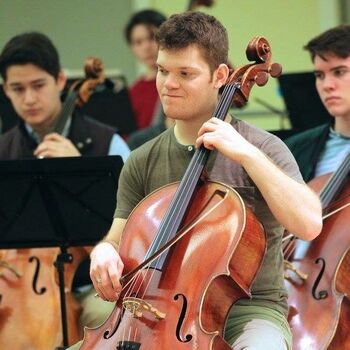 I started to learn my first instrument when I was 8 years old. As a child, I expressed a strong interest in music, often playing the few classical CD’s my parents owned. Mozart and the film “Amadeus” were huge inspirations to me.

​Not coming from a musical family, I begged my parents for lessons with my next door neighbor. I was friends with my piano teacher’s family, having grown up alongside her children -- she still has a studio of 40+ students to this day. I’ll never forget those early recitals and playing duets with her in her studio of two Steinways (one being her grandfather’s, that dated from the 1890’s, with real ivory keys).

I took a long break from piano at 10 or 11 years old. During this time, my younger brother was beginning cello as an educational supplement. He wasn’t so keen on music, or playing cello -- but sitting in on those cello lessons fueled my interest! When I was in fourth grade, I was part of the pilot strings program that was established in the public school system in my hometown the year after. It was during that time that I started cello in earnest and continued with it!

While I was in junior high and high school, I also participated in a number of theater productions: musicals, some plays, sometimes receiving leading parts. Singing and acting became supplements to my musical education. While I didn’t continue with this creative outlet, aspects of singing, drama, and theater have helped me understand and convey the ideas in the music I play and teach.

Did you always think of yourself as a musician?

As a child, I don’t think I really had a concept of what it meant to be a musician. This idea developed, and continues to develop, as I changed and matured.

When I started cello, I became aware of how delicate my  instrument was and fascinated by what it needed in repair, let alone how to play it. During my formative years in starting cello, I became increasingly serious, focused, and responsible for my instrument and to aim as high as I could with my musical and technical goals.

As a teenager, I committed myself to my musical studies as I realized (at the encouraging advice of mentors) that in order to progress and be a better musician, more time and energy was needed. I doubled down on my passion, letting go of my other creative obligations.  I studied and learned about the musicians, composers, artists, and performers I admired and liked.  I was constantly listening to classical music, when not practicing it. It was during this period of time that I think I began to fully understand what it meant to be a musician: the commitment, craft, and courage needed to persevere and thrive!

It’s complicated to list inspiring teachers! I’ve been so fortunate to have benefitted from a variety of instruction from many great and accomplished musicians and pedagogues. While I teach, in many ways -- I am still a student. Sometimes my most inspiring teachers are my students themselves!
Some mentors and teachers during my formative years would have to be those I met while at SBMAC (Santa Barbara Music and Arts Conservatory).  MAC, as it was known, was a conservatory prep style program on Saturday afternoons. For me, this was always the creative highpoint of my week!

I was coached in a string orchestra and chamber ensembles by violinist Nina Bodnar (former concertmaster of the St. Louis Symphony, who won the first prize at the 1980 Thibaud Competition as (at the time, I think) the youngest and only woman to win the prize yet.  Her brother Misha was an accomplished cellist, and her mother Lana was the founder of the program, and an esteemed piano teacher in Santa Barbara. We received coaching from Rob Kapilow, whose “What makes it Great” series is a notable touring educational series.  Conductors came to speak with us -- coach us. John Sant’Ambrogio, who had studied with Leonard Rose and others (and had been in the BSO in the late 1950’s and 60’s, later principal cellist of the St. Louis Symphony for 40 years), often coached chamber music (I received a few private lessons with him as a teenager). Jeness Johnson, student of Janos Starker, came to coach and teach as well.

My hometown teacher, Ervin Klinkon, provided a gentle and nourishing environment for me to grow as a cellist and musician. Coming from Germany, he had studied in Paris with Maurice Gendron before emigrating to the US in the 1950’s to attend the Mannes School.  My college cello teacher, Zarina Irkaeva, continues to live in Lincoln.  She furthered the style I had been used to with Ervin -- under her tutelage I further grew and expanded into the musician I am today.

My theory professor, Guy Urban, was immensely impactful on me as a musician. As a student, I disdained music theory, but under my professor’s guidance, I cultivated a deep love and passion for the structure, grammar, and syntax of classical music. After initially hating theory, I finished my undergrad having won the college prize in the subject!

These are just a few names of many important musical mentors and teachers in my life -- there are honestly far too many to list!

I was a member of the BPYO (Boston Philharmonic Youth Orchestra) during its first two seasons. In the summer of 2013, we went on an international tour to the Netherlands, where we toured and performed in 7 cities.

Adjacent to Amsterdam, we made our primary homebase in Haarlem where we played one concert in the 14th century cathedral there, Saint Bavokerk.  Our repertoire for that concert was Mahler’s Second Symphony, “Resurrection.” I’ll never forget the setting sunlight pouring in through the stained glass at the top of the cathedral as the chorus entered in the final movement -- our bus ride back to our hostel was accompanied by a harvest full moon, the biggest and closest moon I have ever seen!

My practicing habits have definitely changed as I’ve become a professional. As a teenager, I would sometimes take extended breaks, though I often tried to practice as frequently and long in duration as possible.  I’d often spend all my free time practicing or listening to music, learning, trying to grow.

My diligence became even greater post-grad.  When I have the time, I love to practice 4 hours, sometimes more, a day.  My practice continues to be structured, with a warm up of scales, etudes, and then repertoire of different varieties (sonatas, concerti, small pieces, orchestral music). When preparing for an orchestra or chamber concert, I find it best to learn the notes, and try to be spontaneous in rehearsals -- so much shifts and changes in group rehearsals, it’s almost unwise to be too well-acquainted with your individual part before understanding how it fits with the whole!

I engage in score study now, listening to CD’s or YouTube recordings. I’ve also been exploring musical wellness and taking breaks -- when you’re an athlete, you can’t run a marathon everyday. Rest is equally vital for practice: both the body and mind!

My greatest inspiration in teaching young musicians comes from helping them gain self-sufficiency; I love helping my students understand how it all works!  Whether it is physical technique, phrasing and creative artistry, I’m intrigued by the intersection of creative subjectivity and mechanics.  It’s these ideas I aim to impart to my students -- ideas I think help them make cross connections and associations between mediums and subjects beyond music alone: concepts that help one understand the world.

Stick with it! Perseverance and courage to play “the long game” is always the most difficult aspect in learning an instrument.

We live in a society that preconditions us to want and expect immediate gratification; fortunately, music is one of these natural things that is both deeply rooted in physics and as well as our humanity: a natural counterbalance, slowing us down to think and process at our own pace. It takes considerable time to understand and aim for a thing which is both objective and fluid!

What are some of the highlights of your career?

I’ve been fortunate to have had many highlights in my life as a musician.  My experiences as an orchestral cellist in BPYO brought me to Europe for the first time, playing in amazing concert halls (Symphony Hall, Sanders Theater, Carnegie Hall, and the Concertgebouw in Amsterdam). Other highlights have been participating in charity concerts, volunteer orchestras of high artistic level, and chamber music.

My own entrepreneurial projects as an organizer have definitely been major milestones. Conducting the chamber orchestra I founded, Chromos Collaborative, as well as organizing pandemic chamber music concerts in the courtyard of my apartment building have been recent accomplishments. These pandemic concerts resulted in a Boston Globe feature.

I was elated to be able to conduct the Ip Piano School concerto concert with an orchestra of 40 orchestral colleagues and 13 student soloists. This was such an amazing experience to play and work with students in a professional setting!

When you are not performing or teaching, what do you like to do?

When I’m not teaching or practicing, I’m always trying to engage with the world and to learn. I love to go for hikes and walks, Mt. Auburn Cemetery and the Riverbend park (along Memorial Drive in Cambridge) being one of my perennial favorites. I have a passion for cooking homemade food, cats, cycling, gym-going, reading books, listening to YouTube podcasts, and foreign language series (French and German are some of my favorites). Overall, I strive to live a balanced and full life outside of the practice room and teaching studio.

To learn more about Nicolas, please visit his Teacher Page.
Contact us about lessons