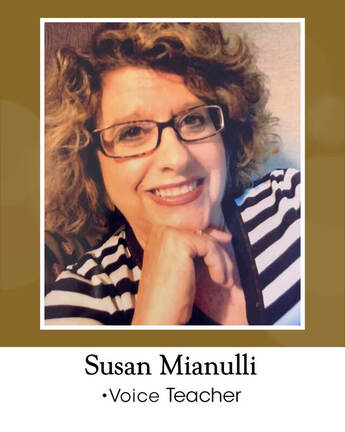 Teaching Philosophy: Teaching Philosophy: Learning healthy singing technique is paramount to successful singing. It is my goal to allow my students to “grow” their voices at their own pace and allow this growth to lead them to a life time of singing that is vocally comfortable, fluid, and expandable in all genres of music. I use a consistently positive approach with each student taking into account that singing is innately very personal. We are the instrument. This, of course, is what makes singing so exciting.

Soprano, Susan Impress Mianulli’s performance career was launched after her placement as a regional semi-finalist in the Metropolitan Opera Auditions. She has been a guest artist and recitalist with orchestras and choral ensembles in the Northeast including the Salem Philharmonic, the Cape Ann Symphony, and the Nittany Valley Orchestra and Chorus. She has been a featured soloist for the Essex Institute Artist Series, the Old North Church Concert Series, and the Ohio University Artist Series.

Ms. Mianulli received her B.S. in Music Education and a Master of Fine Arts in Vocal Performance from the Pennsylvania State University. Her teaching career has included appointments at three schools of higher learning: Juniata College; The Music School of North Shore Community College established by the acquisition of a former New England
Conservatory satellite school; and Ohio University where she was hired through a grant from the National Endowment for the Arts to teach classical singing technique to graduate actors enrolled in the Master of Fine Arts curriculum.

For over 20 years Ms. Mianulli served as the Director of Choral Music at Nashoba Regional High School in Bolton, MA. A former student was a
participant on American Idol and was also chosen to join the Grammy Awards High School Jazz Choir (12 chosen nationwide). Nashoba students were also chosen for the All-East Honors Choir and as High School Fellows at Tanglewood. The Nashoba Madrigal Choir was one of 15 choirs chosen nationwide to participate in the Heritage Festival of Gold held at the Kennedy Center in Washington D.C. After receiving a Gold Medal at an ACDA competition, the Nashoba Madrigal Choir was honored by being asked to perform at Symphony Hall.

Ms. Mianuli has served as an adjudicator for the National Association of Teachers of singing NATSAA competition and currently serves as a vocal
Judge for the MMEA Central District Jr. and Sr. High Music Festivals. Ms. Mianulli resides in an antique home in Groton with her three cats, Miley, Callie, and Brady.

Susan began teaching choral music at Nashoba in 1994. She has been with Note-worthy Experiences since January 2020.