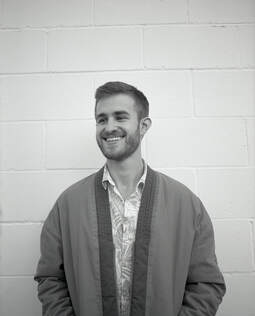 How old were you when you first got interested in music, and how did you begin learning your instrument?

Before picking an instrument for 5th grade band, music was already something I gravitated towards in a personal way. My mom and dad are huge music fans and they took me to concerts, told me what songs were playing on the CD’s in the car, and asked what I wanted to listen to.
My mom sang along to Bonnie Raitt songs while working from home and my dad would blast Bob Seger or Genesis over the speakers in the garage when I helped him out in his woodshop. So they helped me notice the different instruments in music and for some reason drums were
just my ‘spirit animal’ if you will. When I had to choose in 5th grade, I signed up for percussion. After a while of trying to figure things out on my own with a method book, I started going over Tomy neighbor’s house and taking lessons with him since he played in a classic rock cover band and had a drum set. Then, I joined the middle school jazz band and also started playing drums at church. Those two experiences helped me grow and put things into practice with other people.

Drums are my first instrument and still my main one. Piano came the most naturally after drums (not that it was easy, just more friendly than guitar). One of my favorite bands growing up was The Fray and they have a lot of great piano-driven songs. I think the drums were also mixed very well in their recordings, so I practiced along to those songs with headphones and tried to “be” the drummer. It must have also helped me absorb the voicings and rhythms of the piano parts. Guitar is my most recent instrument. I bought my first acoustic about 5 years ago, but before that I had been babysitting friends’ guitars for long periods and trying to learn on my own. The barrier to entry was much larger for me with guitar. I pretty much decided to give up 2 or 3 times because my hands just couldn’t do it. But things changed when I started playing more
consistently, and that helped make it more fun. It’s one of my favorite instruments because you can bring it anywhere, and it is at the intersection of percussion and harmony. You can make all sorts of expressive timbres on guitar, and it’s super inspiring to me as a songwriter.

My first teacher really ignited the spark for me. I could tell he had so much fun whenever he played, and it made me want to get better and be able to play with his same joy and confidence. His name is Steve Austin, and at the time, I was way too young to understand the TV show reference in his name! Another Steve who was monumental for me is Steve Wilkes, who I met in my first semester at Berklee. I ended up studying with him for 2 more semesters after that. My favorite thing about Wilkes is that he doesn’t only think like an athletic drummer: more like an emotionally intelligent drummer. And yes, sometimes the emotion of the music does require loud and frenzied playing! But he showed me the importance of bringing my identity to my instrument, and choosing techniques that translate the emotional results that I want from my sound. He’s also the type of guy who catches you by surprise with a ridiculous joke after a lengthy discussion on something very serious and philosophical. His timing is very good (pun
intended). And to follow the Steve theme, Steve Jordan has taught me a lot, even though I have yet to meet him. (Hopefully someday!)​

​Learn more about Jacob on his Teacher Page. ​
Contact us About lessons