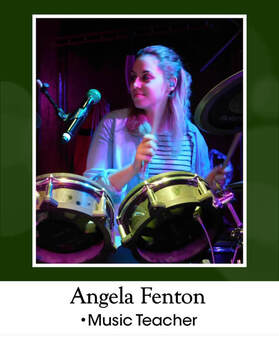 Teaching Philosophy: "I believe that anyone can learn music. The key to success in learning a new instrument or getting started in a new field is easy; make it fun! There are so many ways we can get to the same end goal, whether we are starting with classical music, commercial jingles, or a top 40 song. Music is everywhere and all types are welcomed and encouraged in my lessons."

Biography: Angela is a multi-instrumentalist and singer-songwriter in the Greater Boston Area, who frequently performs at Boston’s favorite dueling piano bar, Howl At The Moon.

From first chair alto saxophone in her high school jazz band to leading her high school musical, Angela started exploring multi-dimensional aspects of music very early on in her life with much success. At 16, she taught herself guitar and began writing songs.
This triggered a passion for contemporary music like she had never seen before. She darted off to Berklee College of Music in 2015 to further explore this obsession.

In 2017, Angela ventured off to Nashville, TN to further explore songwriting and to study under the world-renowned vocal coach, Brett Manning. She flourished as an administrative assistant in Brett’s office, but quickly took advantage of all of the singing opportunities that came to her through the studio. After having access to lessons from all of the outstanding coaches in the studio, and using all of Brett’s at home programs, Angela returned to Boston in January 2018 with a voice that was stronger than ever.

Upon returning to Boston, Angela began performing regularly at Howl At The Moon, which is a hot nightclub in Boston that showcases vibrant musicians with a multifaceted performance style. There Angela picked up piano skills, even drums and bass guitar, and got to play alongside some of her best friends, whilst growing even further into the well-rounded musician she always craved to be. Angela solidified this by completing a Bachelor’s Degree in 2019 at Berklee in Interdisciplinary Music Studies.

All things music seemed to come to a screeching halt at the start of the pandemic in March of 2020, but Angela is eager to get back into it and pick up where she left off.

Angela began teaching singing and acting in 2013 at a local theatre camp, Act One Scene One, in Brockton and taught there for 3 years. She then taught at the School of Rock in Natick starting in 2017 and has taught guitar and piano privately since then as well. Angela has been with Note-worthy Experiences since April 2021 and is teaching piano, voice, ukulele, guitar and drums in person and online.
CONTACT US ABOUT LESSONS