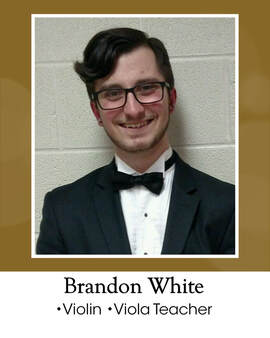 Teaching Philosophy: "My teaching style can be summarized succinctly - one is always learning, and there is no one correct way to perform a musical piece. Similarly, there is no one way to teach a student. While some students may have similar paths and learning styles, everyone approaches music in a different way. Through my teaching, I employ an individual approach that identifies and cultivates each student’s unique musical style to inspire their musical minds to come to life in their playing."

Biography: Originally from New York and now residing in the Boston area, Brandon White has established a varied career as both successful performer and inspiring teacher. His versatility has led to success as both a collaborative and solo musician, having performed as a key member of numerous orchestral and chamber groups. As a classically trained violist with training across the Western canon, Brandon has been recognized for his ability to balance intellect and aesthetics in his performances of both contemporary music and the classics. He holds several degrees, including a Master of Music degree in String Performance at the prestigious Boston Conservatory at Berklee, where he studied under Lila Brown, and a Bachelor of Music degree in Viola Performance at SUNY Potsdam, where he studied with Shelly Tramposh.

Throughout his career, he has had the opportunity to perform in internationally recognized venues such as Carnegie Hall, Lincoln Center, and Jordan Hall. Additionally, he has participated in master classes with renowned artists including Jonathan Vinocour, Nicholas Cords, Patricia McCarty, Rictor Noren, and Andrew Altenbach.
Brandon’s accomplishments have resulted in several awards and accolades, including winning the Richard Stephen Chamber Music Competition in 2015 and 2017, representing the string area for the Crane Honors Recital in 2016, being selected as a finalist for the Boston Conservatory Concerto Competition in 2017, and winning a coveted spot in Boston Conservatory’s Honors Ensemble for the 2018-2019 concert season.

Presently, Brandon performs as the principal violist of the Cape Ann Symphony, a member of the viola section of the Rivers Symphony Orchestra, and is a key member and founder of the contemporary viola duo Waterhouse Row.

Brandon has been teaching since 2015 and has been with Note-worthy Experiences since May 2021, where he teaches online and in person violin and viola lessons.
"(Our son) loves working with Brandon. He is excited about playing after his lessons and remarks on how nice his teacher is."
​- Sarah M. of Wayland