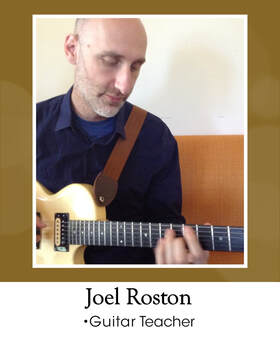 Teaching Philosophy: Focused mainly in the classical and rock (in all of its guises) arenas, Joel is committed to tailoring lessons to each student’s particular learning style and interests. Joel’s love of music theory and lifelong commitment to rudiments is tempered by his deep interest in "just plain messing around on the guitar."
A lifelong student himself (currently studying piano privately), Joel is very interested in practice hygiene and how to get the most out of time spent working on concepts outside of lessons.

Biography: Joel is a guitar player and composer living in Boston, MA.
As a guitar player, Joel has played in, composed for, and toured with his own bands, Big Bear and Beautiful Weekend, as well as other projects including Tyondai Braxton’s Wordless Music Group (in collaboration with the LA Philharmonic, the BBC Symphony Orchestra, and the The London Sinfonietta), Man Forever, Evan Ziporyn’s Critical Band, MIT’s Balinese Gamelan ensemble Gamelan Galak Tika, Glenn Branca’s 100-guitar ensemble for “Symphony No. 13 Hallucination City,” and Kevin Micka’s Animal Hospital Ensemble.

Joel studied classical guitar performance at the University of Hartford’s Hartt School. He has been teaching for Note-worthy Experiences since June 2019. He teaches online guitar, composition, and music theory lessons.
Joel Roston​ is literally the best. thing. ever.  His guidance, demeanor, knowledge, sense of humor, communication with my husband and I... everything.  "We could not love him more - he is just fantastic!"
- Corrine of Framingham
CONTACT US ABOUT LESSONS