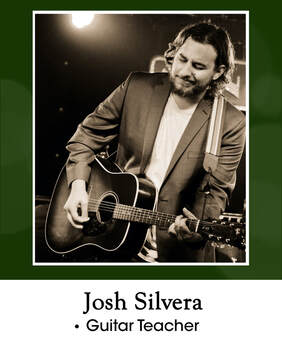 Teaching Philosophy: "My teaching philosophy is simple: all music stems from love. As a teacher, it’s my job to foster that love of music and to overcome the obstacles between the heart and the hands; or in other words, to fan the spark of joy that’s shared by all of us who play. My strength as an educator is carefully listening to my students to meet them where they are. Every student’s style of learning is unique; one size does not fit all. Positive reinforcement, constant challenges, and radical acceptance are the keys to cultivating growth."

Biography: Josh Silvera is a musician of many hats: guitarist, singer, songwriter, producer, and multi-instrumentalist, and (since 2014) teacher. In his 25 years, Josh has worked as a performing and recording artist across LA and Boston. Growing up a homeschooler in LA, he first started guitar lessons at just 3 years old, and soon added piano, bass, and recording software to his toolbox. In middle school, as an elder student in the newly founded LA Jewish Homeschooler co-op, he gave back to his community by teaching guitar to students and adults alike. He continued teaching until moving to Boston in early 2020. Homeschooling granted him a place in a diverse, talented, and passionate musical community (including a young Billie Eilish and her brother Finneas!). At age 15, Josh got his GED and began attending Santa Monica College, where he earned a degree in Math before transferring to Berklee College of Music to pursue music professionally. While at SMC, he released his first single, and worked as a performing artist, both on his own and in local bands (most notably as a guitarist with the eclectic Britpop/ Soul/ West Coast Rap group PLVNK). At Berklee, Josh contributed to a host of his fellow students’ projects as a guitarist, songwriter, and engineer. And under his own banner, his debut single, Streetlights, is now available across all streaming platforms, and his follow-up EP (under the working title Mambo Johnny’s Slow Descent Into Madness) is coming by Summer 2023.

Josh joined Note-worthy Experiences in August 2022 and has been teaching since 2014.
CONTACT US ABOUT LESSONS