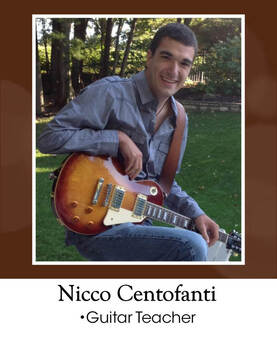 Teaching Philosophy: "I am a firm believer in helping each student discover their own personal and unique style by training and developing their innate creativity. In my lessons, students will work on technique, repertoire, and theory, using real-world examples from the music they are passionate about, as well as from many different genres in order to gain the knowledge and dexterity necessary to develop their own sound, create their own music, and reach their personal goals."

A New England native, Nicco Centofanti does not consider himself a guitarist, rather a musician who plays the guitar. Originally influenced by classic rock and blues, Centofanti’s musical horizons have expanded far beyond rock and it's subgenres since his adolescence. He soon began devouring as much music as he could get his hands on, becoming engrossed in the worlds of Jazz, R&B, Classical (both common practice and 20th century/contemporary), Electronic (both dance and art music), as well as music from all around the world. Centofanti does not believe in genre, or that one style of music is more valid than another. When asked to name his biggest influence on the guitar, he is just as likely to name figures such as Ravel, Duke Ellington, or Flying Lotus as he is to name an actual guitarist! Nicco has performed at many prestigious venues, including Times Square, the Boston House of Blues, Brighton Music Hall, and Faneuil Hall, among others.

As well as playing in various ensembles in high school, Centofanti was a member of the school big band, which played approximately 100 concerts per year in various venues, including Disney World. After high school, he enrolled at the University of Vermont as an Honors College scholar, focusing on Physics and Jazz Studies. During this time, he studied all genres of music, and studied with Berklee alumnus Joseph Capps and Grammy winner Ray Vega. Centofanti graduated summa cum laude from the prestigious Berklee College Of  Music with his degree in Professional Music, where he studied with renowned musicians Ray Vega,
Jason Palmer, and John Wheatley, among others. He plans to continue working towards his masters degree. Centofanti continues to be active both as a performer and teacher; he plays in, directs, and mentors various ensembles as well as teaches guitar and bass. Nicco has been teaching since 2008 and has been with Note-worthy Experiences since November 2015.

Learn more about Nicco on his Teacher Feature.

Nicco is a great guitar teacher. His enthusiasm for music is contagious and he has a gift for tuning into the interests of his student. He follows their lead in exploring new songs and genres and it’s extraordinary to watch.
​
- Ruth from Sudbury
Listen to Nicco Play