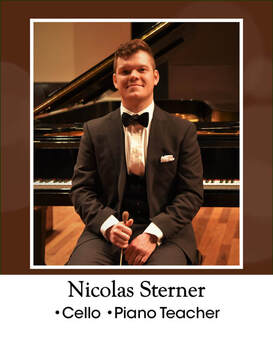 Teaching Philosophy: "As teacher and student, the emphasis of our work together will be on the technical, physical, artistic, psychological, intellectual, and philosophical aspects of music-making. I care deeply about teaching music and the quality of results-driven learning I provide for all my students. I am a patient, analytical, and Socratic teacher; I pair these strengths alongside a sense of humor so that lessons are varied and never dull. My intention is to actively guide the progress each student will make in their study of cello and/or piano by developing the critical thinking necessary to read and perform classical music, as well as to foster an understanding of theory and foundational technique."

Biography: A native of Santa Barbara, California, Nicolas Sterner is a conductor, cellist, educator, and writer.

Nick began his exploration of classical music in studying the piano at the age of 8. He began his study of cello at age 12 after discovering the expressive range, versatility, and resonance of this sonorous string instrument. Determined to find more training at a higher caliber in his hometown, he attended an elite conservatory prep program (Santa Barbara Music and Arts Conservatory, or MAC) in high school where he studied chamber music and conducting. Nicolas went on to complete his Bachelor of Arts degree at Wheaton College in Norton, MA in 2016, where he was a scholarship recipient. He studied with cellist Zarina Irkaeva (M.M., St. Petersburg Conservatory, St. Petersburg State Symphony Orchestra) and won Wheaton’s Edna D. Parks Prize in music theory as well as the Concerto-Aria Competition. During his time at Wheaton, Sterner played with the Boston Philharmonic Youth Orchestra, through which he taught music to inner city youth in an El Sistema modeled organization affiliated with the Boston Philharmonic Crescendo! Program. He has maintained a studio of music students since college, being professionally active in the Boston area since 2016.

After receiving his degree in music with a minor in international politics, Nicolas set off on a path of musical self-discovery, beyond the traditional confines of the conservatory system. The freedom to explore new ways to share his musical passion and talent led to the founding of his own ensemble - Chromos Collaborative Orchestra - where he serves as the organization’s collaborative director and conductor. He also pursued real-world, practical experience in music administration and management by working for the Eda K. Loeb Music Library at Harvard University, Emmanuel Music, GroupMuse, and presently as concert manager for the GLISSANDO Concert Series with Sergey Schepkin, founder and artistic director.

Sterner has traveled extensively throughout Europe to engage in self-study of aesthetic philosophy, art history, and music criticism. He recently visited Austria and Germany, where he attended and reviewed orchestral performances in Berlin and Salzburg. You can read Nicolas’ published works through the Boston Musical Intelligencer, a highly-respected music journalism venue.

In the summer and fall of 2020, Nicolas reconfigured the Chromos Collaborative Orchestra to accommodate a chamber music division - Chromos Collaborative - which produced socially distant outdoor concerts as part of the newly launched Courtyard Concert series. Other recent musical engagements include performances and masterclasses with Colin Carr at the Maine Chamber Music Seminar, conducting the Ip Piano School concerto concert, performances with MIT chamber music ensembles, and a conducting seminar in Berlin, Germany with Brandon Keith Brown.

When he’s not teaching, practicing, or writing music reviews, Nicolas enjoys exploring nature, exercise, cycling, reading, cooking, dreaming of his next trip to Europe, and maintaining his knowledge of French and German.

Nicolas teaches in-person and long-term online/virtual lessons and has been teaching since 2016. He joined Note-worthy Experiences in September 2021 and was a judge for the 2022 Merit Scholarship Competition.