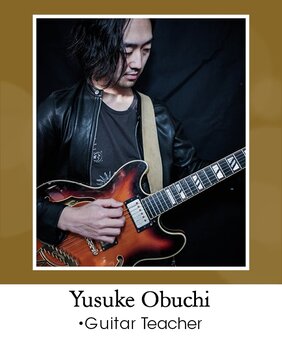 Teaching Philosophy: "My teaching philosophy is to provide students with the knowledge and information for them to appreciate music and the related fine arts. I want my students to be actively listening, participating and engaging through music. I want my students to know that their life somehow will be touched by music and how great that is. It is my role, as a music educator, to teach, provide and show the potential for my students."

Biography: Yusuke Obuchi, a highly distinguished guitarist, attended Berklee College of Music and has become one of the most sought after instrumentalists on the East Coast.  He has been a major force and a core/regular member and lead guitarist for well-known artists, bands and projects such as the 5th season of The Voice singer Greylyn Paulszynski, producer/keyboardist Yukihiro Kanesaka, Luis Figueroa (who is currently on tour with pop and salsa icon Mark Anthony), Adam Friedman, and Christian Saint-Louis, a featured bassist for Grammy Award-Winning Dianne Reeves's newly released album Beautiful Life. Yusuke also plays with his own jazz trio, Mood Swing Band, Masa Band (neo soul, funk), DCQ (pop), and Soul Monstah's (pop).

Yusuke has been teaching since 2015 and has been with Note-worthy Experiences since May 2017. He teaches online and in person guitar lessons.
Yusuke has been a wonderful guitar teacher for my teen daughter.  His clear expertise, patience, and friendly manner make him a perfect match. He listens to her preferences and works with her to play songs that fit her style. Although she has only been playing for a few months, my daughter looks forward to her lessons, enjoys practicing, and is making great progress.  We highly recommend Yusuke to anyone looking for a first guitar teacher!
-Jessica from Sudbury