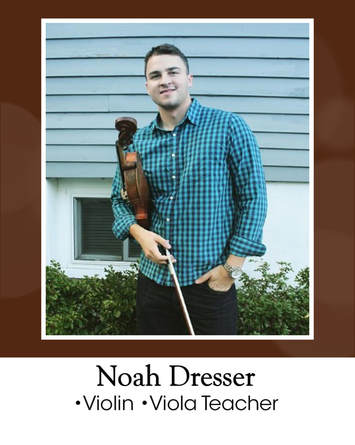 Noah Dresser began his violin studies at the age of 7, studying with Tomislav Dimov in Pittsburgh, PA. He grew up with the Suzuki method, playing in many festivals and camps at an early age. He went on to take up the viola at the age of 15 before joining the Pittsburgh Youth Symphony, where they toured throughout China in 2008.

Noah has soloed with orchestras in the Ohio area, performed in festivals all over the US as well as in Canada, and has performed with a number of chamber and orchestral groups in the Boston area since 2012. His primary teachers were Joseph Petron in Pittsburgh, PA, Thomas Wood in Wooster, OH, and famed violist Dimitri Murrath for his graduate studies in Boston, MA.
​
Noah holds a Master’s Degree graduate from the Longy School of Music, Noah maintains a private studio of violin and viola students in Somerville and Cambridge and is accepting new students throughout the greater Boston area.