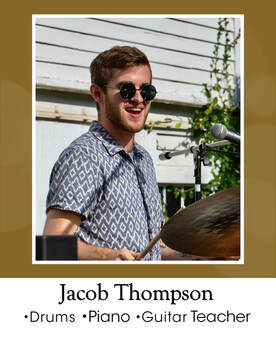 Teaching Philosophy: "I believe in the expression “music is a language.” We learn music best if we approach it like that. Language is not just written: it is heard, it is felt, spoken, etc... Before we learn the alphabet we can probably already ask to go to the bathroom, or for a cup of water. I like to approach teaching music this way. After we have heard a song and can hum along to it, we have an understanding. From there we can delve into the technical language for what’s going on and how to apply those skills elsewhere. But first, I like to engage my students in ways of learning that are fun and participatory, like a call and response game with rhythm or melody. Or maybe just tapping their feet along to a song they know and identifying as many instruments as they can distinguish. I like giving assignments that give them the opportunity to be creative, ie. There are many ways to play the same rhythm on the drum set: how many can you come up with? Sometimes I will simply assign listening homework and give them specific questions with which to engage while they listen. Listening to music is the best way to be inspired to create. I love encouraging students to listen beyond the drums to find inspiration. Many drummers may not think to transcribe just the rhythms of Miles Davis trumpet solos, but they are choc full of amazing ideas!

"Sometimes, in the minutiae of technical exercises and music made in an academic setting, it’s easy to lose sight of the reason we picked up our instrument in the first place — to be enlivened and have fun. So with whatever the student and I work on, I try my best to find a song or practice piece that somehow ties into their personal music taste. This way, they can learn skills and vocabulary through the lens of music that already gets them excited. And if I do bring them something outside of their familiarity or music taste, I like to give context and relate it to something they know. So if I’m talking about jazz drumming with a student who loves rap music, I might point out how Max Roach and J. Cole are both talented at improvising and using rhythm in exciting ways; showing the lineage of inspiration that connects something seemingly outdated to something that is fresh and new today."

Jacob Thompson is a less-is-more drummer, songwriter, and multi-instrumentalist. His heart is for playing songs - serving the lyrics and the emotion of a story. Jacob is currently based in Boston, MA after graduating from Berklee College of Music, where he majored in Professional Music with concentrations in Performance & Songwriting.

In January 2019, he joined the Boston based retro rock band Morningbird, playing the drums and singing. His debut EP of original songs, entitled “Game of Life, ”in which he is singing, playing the drums, piano, and acoustic guitar, was released on August 14th, 2019 on all streaming platforms.

Jacob grew up in a rural part of Washington State, 45 minutes north of Seattle. His music (whether his drumming, piano playing, or lyric writing), reflects the pensive nature of his personality and the stoic beauty of the environment and stories that have shaped him. He started playing the drum set in church when he was 12 years old, after persistently asking the music director for an audition. When he finally made the team, he played nearly every weekend throughout middle school and high school, honing his ability to learn and play songs by ear, and adjusting his playing volume to different sized bands each Sunday. Jacob had always been drawn to the piano, and in high school, as he learned more music theory, he became more serious about practicing his technique, and learning songs by bands and artists he liked such as The Fray, Bruce Hornsby and the Range, and Norah Jones. In his senior year of high school, he took 6 months of piano lessons with a local jazz musician in Seattle and learned more about proper fingerings and more  sophisticated ways to voice chords on the piano. His favorite styles to play and write on the piano are pop, and rock, but he does take influence from the musicality and intricacy of jazz pianists he has studied like Bill Evans and Bruce Hornsby. He is frequently hired to play piano and keyboard for weekend services at his church in Framingham, MA.

In 2016, while still at Berklee, Jacob bought his first guitar and it inspired him to write songs in a new way. He has spent the most time practicing and learning songs on the acoustic guitar that use finger-picking. Some of his influences from a guitar perspective include Jason Isbell, The Avett Brothers, John Mayer, Jose González, and Joni Mitchell. He is currently roommates with a Berklee alumni who studied guitar performance, and they frequently give each other lessons on their own first instruments.

As a sideman, Jacob has collaborated with a wide range of artists live and in the studio, including Kat McLevey, a folk/rock singer songwriter whose album Evergrown was nominated for an East Coast Music Awards Rising Star Recording of the Year Award. Jacob has recorded and performed with Jonny Glenn (a 2018 Boston Music Awards Pop Artist of the Year nominee) and Erica Leigh (ASCAP & SESAC award-winning singer-songwriter). He currently performs regularly around New England with Bates alumna Alisa Amador (an NPR tiny desk competition runner up).

He has been teaching since 2014 and has been with Note-worthy Experiences since January 2020, where he teaches online and in person piano, guitar and drums.


My thirteen year old son has been taking drum lessons from Jacob for about a year now. Given we started with him in the middle of the pandemic, we hadn't even met face to face until a few months ago! But regardless of whether he's teaching Charlie over Zoom or in-person, Jacob has been great -- positive, encouraging, and always focused on making lessons fun. Charlie really appreciates the videos and links Jacob shares as a way of improving his drumming even outside of lesson time. We can't recommend him enough!